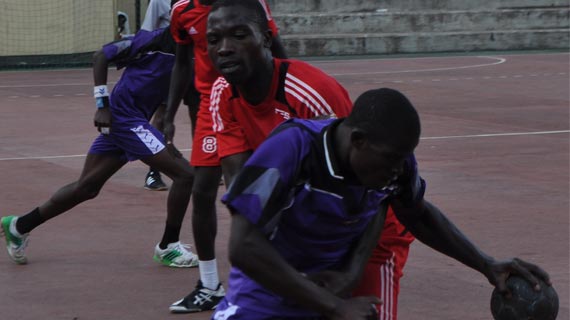 Kaloleni based Black Mamba Handball club were bundled out of the East and Central Club Championship on Thursday afternoon after losing 36-34 by Prisons from Congo in the close encounter played at the Nyayo Handball Court. Mamba was in Pool A alongside Cereals, Prisons and National Youth Service.

The self sponsored side had to win the match in order to qualify for a semi-final spot but this was not be as the visitors had other plans.

Black Mamba who had the backing of the fans had started on a good note managing to contain Prisons and by half time they led 18-16. In the second half of the match Prisons came out more rejuvenated and they managed to rally back despite the goalkeeper being given a red card for a foul he committed outside the D area. Prisons capitalized on Mamba’s laxity in defense going ahead to take the day and join defending champions Cereals in the semi finals of the tournament.

Speaking to michezoafrika.com, Martin Abunde the Mamba coach applauded his side’s fighting spirit and said they are now focused on the Kenya Handball Federation League,” we were in a very tough pool but the boys still fought on. The tournament was worth our time although our fitness was wanting, but now we shift our focus on the league.”

In another match(Pool B) played at the same venue Tobias Onyango’s Kenyatta University slumped once more and were beaten 34-24 by AS Police to hinder any chances of proceeding to the semis. However Onyango was pleased with his team stating that they had received the necessary experience in a top level tournament and would correct on their mistakes,

“we have seen where we are weak and also our strengths and I can say we had a good outing, what remains is to rectify where we had problems and we are good to go.” Despite the loss Kenyatta University still has a match that will be played on Friday from 9 am against Mombasa based Glorious Handball Club.

In other fixtures set for Friday University of Nairobi will go against Strathmore University to decide which team between the two will join Police in the semis since both teams have registered 2 wins. The match will be played from 10 am and it will be the last preliminary match in Pool B of the men’s category.

The semi finals format will be played (on Friday) as follows: