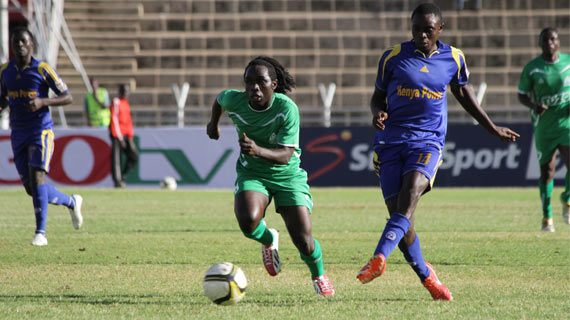 Gor Mahia’s hopes of a double at the end of the season are much alive after they beat visiting Western Stima 2-0 at Nyayo Stadium on Saturday afternoon to progress to the semi-final of the FKF GOTV Cup. Gor Mahia  leads in the Kenyan Premier League standings and look set to bag the title.

Ugandan striker Dan Sserunkuma bagged a brace to dim the Western Stima side who lacked their finesse known to cause trouble to the opponents. Sserunkuma’s  first goal was a clinical finish in the 40th minute from a superb Eric Ochieng pass. Minutes later he combined well with Edwin Lavatsa  to bury home the second.

The second half was a tale of missed chances. Edwin Lavatsa and Sserunkuma  had great chances but squandered them. Another culprit was Mungai Kiongera who wasted a one on one opportunity in the 75th minute by dribbling too much.

New revelation George Wanyonyi also had another good outing in K’Ogalo jersey with his timed run and combination with Sserunkuma posing a constant menace to the Western Stima backline.

Sserunkuma deservedly won the man of the match DSTV goodies.

In another match GOTV Cup match played on Saturday, former Gor Mahia custodian Wycliffe Kasaya was hero after stopping Mathare United in the post-match penalty to send  Sony Sugar into the Semi final. The match had ended on a barren draw.