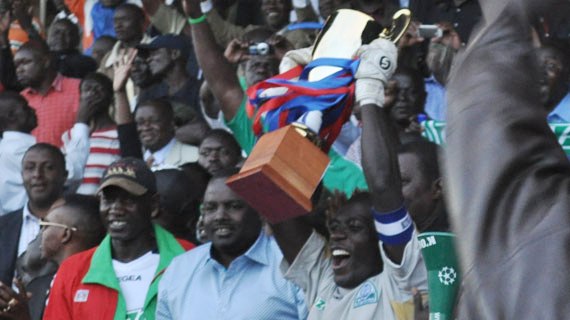 The search for Kenya’s representatives in next year’s CAF Confederations Cup will be on this weekend as the fixtures for the FKF Cup enter the last 16 stage. There will be eight matches across Saturday and Sunday at various venues.

Defending Champions Gor Mahia will on Saturday welcome Western Stima at the City Stadium. Gor Mahia is currently lively in the League standings and will seek to replicate the same form when they face the power men.

K’Ogalo found their way to the last 16 after a 5-2 demolition of Borabu chiefs at the same venue in the first round of 32. Stima on the other hand beat Sacramento to sail through.

Last year’s finalists Sofapaka will play Mahakama as they seek to move into the quarters with ease. Ezekiel Akwana will want to use his experience with Batoto Ba Mungu where he took them up to the third round in the 2011 season. He will be facing the same side this time on the opposite side as Mahakama Coach.

AFC Leopards who exited last year’s competition in the Semi finals losing 1-0 to arch rivals Gor Mahia will be the “Away” team playing Congo United at the Nyayo National Stadium. Leopards who are seeking a double this season eliminated Mathare United in the round of 32 and a win against Congo will keep their dreams alive.

KPL Defending Champions Tusker FC will be welcoming Wamo at the City Stadium with Robert Matano being in his second match in charge of the brewers. Flowermen Karuturi Sports will be at their home turf in Naivasha and they will welcome Nairobi Stima. University lads Wazito will be out to tax KRA at the University of Nairobi grounds. In the last match, Nzoia United will be welcoming Taqwa.