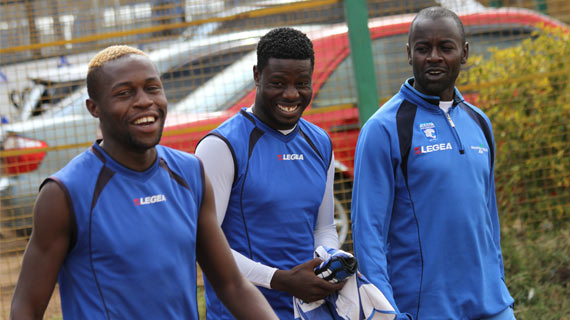 Buoyed   by their impeccable run in the   last three league matches, AFC Leopards tackle Karuturi Sports on Sunday afternoon at the  Nyayo national stadium aware  that  only  victory should suffice if they are to end their trophy drought.

Ingwe  under James Nandwa  has been on  a roll  and have picked nine points in  the last three league matches   and  go  into  today’s’  clash as the hot favorites to sail to the GOtv  Shield Cup semis.

Ingwe though placed third on the league table standings  on 38 points  have a very remote  chance of  clinching the league title and the domestic  Cup  is   their only  hope of ending their  four  year  wait of a major trophy. Since Nandwa took charge confidence is evidently building in the squad and the “big cats” are expected to come   hard on the struggling Karuturi boys.

“We have a chance in this competition and we want to try our best and see where we can reach. Of course the dream of a coach is always to win some Silverware” said coach Nandwa ahead of the showdown.

In their last league match, Ingwe they demolished Muhoroni Youth 3-0, with Oscar Kadenge and Augustine Etemesi, all considered fringe players getting rare head start and their stellar performance could once again earn starting roles.

Karuturi on the other hand are still bottom placed on the log on 18 points. They are badly wounded and are expected to give Ingwe a stiff challenge.

The  ‘flower  boys’  have nothing to lose  and are likely to deploy an offensive   formation as  they seek to salvage some pride  in the Domestic Cup in a season that  has seen them struggle on all fronts.