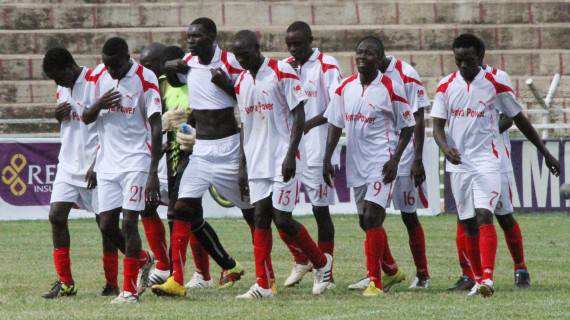 As a matter of fact Gor Mahia has been the best team this season if their position on the premier league tale is anything to go by.

Rooted at  the summit of the log on 47 points, seven ahead of closest challengers Sofapaka  with a game in hand ( the yet to be decided tie against Sony Sugar) K’Ogalo has  been on a roll and this  good  run is set to come under  severe  test  when they confront Western Stima on Saturday  afternoon at the  monumental Nyayo national stadium  in  the  GOtv  quarter  finals match.

It will be the third time the two protagonists are facing off this season. In the first leg league match played at Stima’s backyard,  Gor fell 1-2  before turning tables  to win the corresponding fixture 2-0 in Nairobi.

As a result, tomorrow’s showdown gives each side a chance to flex its muscles in a bid to earn dominance.

Stima compared to Gor who has won 12 league titles and 10 Domestic Cups, has never won a major trophy in their 16 year existence.

The best they have earned is a runner up position in the KPL Top Eight tournament in 2011 when they came second to eventual champions Ulinzi Stars.

With earning a Top 8 under severe threat this season , the “power men’ are likely to play the spoilers role  when they tackle Gor  and Bob Williamson’s boys  will need to be cautious  in their game plan.

Gor’s skipper Jerim Onyango early this week said that his dream is to bag a Cup double and their aim is to retain the trophy they won last season “is as strong as ever”.

Jerim’s words may have expressed a mere intent, but the real talking will be on the pitch where   they will have to work their socks off   if they are to sail to the semis.

Jerim is however expected to play second fiddle tomorrow to veteran shot stopper Ivo Mapunda who is certainly expected to start between the sticks.

Williamson is also expected to hand prominent roles to players who have not featured regularly in the league ties and full backs Christopher Wekesa and Solomon Nasio could feature.