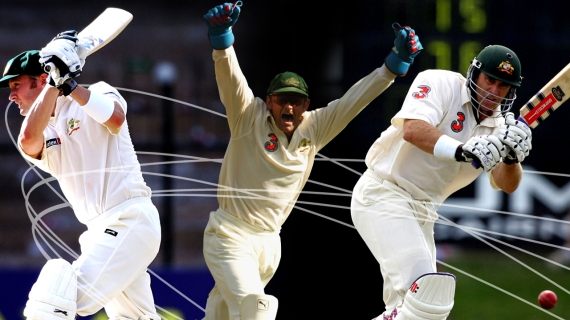 Cricket is a bat-and-ball game played between two teams of 11 players on a roughly circular field, at the centre of which is a rectangular 22-yard long pitch. Each team takes it in turn to bat, in which they attempt to accumulate as many runs as possible, while the other team fields, attempting to prevent the batting team scoring runs. Teams may bat once or twice each depending upon the format of the game.

Bat-The cricket bat is made of wood and has the shape of a blade topped by a cylindrical handle.

Ball-The ball is a hard leather-seamed spheroid, with a circumference of 9 inches. The hardness of the ball, which can be delivered at speeds of more than 140 km/h, is a matter for concern and batsmen wear protective clothing including pads (designed to protect the knees and shins), batting gloves for the hands, a helmet for the head and a box inside the trousers to protect the crotch area.

Cricket is played on a grassy field. The Law of Cricket does not specify the size or shape of the field, but it is often oval / elliptical. In the centre of the field is a rectangular strip, known as the pitch. The pitch is a flat surface 10 feet (3.0 m) wide, with very short grass that tends to be worn away as the game progresses. At either end of the pitch, 22 yards (20 m) apart, are placed wooden targets, known as the wickets .These serve as a target for the bowling (also known as the fielding side and are defended by the batting side, which seeks to accumulate runs.

The game on the field is regulated by two umpires, one of whom stands behind the wicket at the bowler's end, the other in a position called "square leg" to the side of the "on strike" batsman. The main role of the umpires is to adjudicate on whether a ball is correctly bowled when a run is scored, and whether a batsman is out. Umpires also determine when intervals start and end, decide on the suitability of the playing conditions and can interrupt or even abandon the match due to circumstances likely to endanger the players, such as a damp pitch or deterioration of the light.

These matches also have a match referee whose job is to ensure that play is within the Laws of cricket and the spirit of the game.

Scorers are appointed to record all runs scored, all wickets taken and, where appropriate, number of overs bowled. In professional games, in compliance with the Laws of Cricket, two scorers are appointed, most often one provided by each team.

Format of the game

A cricket match is divided into periods called innings. It is decided before the match whether each team will have either one inning or two innings each. During an inning one team fields and the other bats. The two teams switch between fielding and batting after each inning. All eleven members of the fielding team take the field, but only two members of the batting team (two batsmen) are on the field at any given time.

The two batsmen stand at opposite ends of the pitch, each behind a line on the pitch known as a crease. The fielding team's eleven members stand outside the pitch, spread out across the field.

If the batsman is successful in striking the ball and the ball is not caught before it hits the ground, the two batsmen may then try to score points for their team by running the length of the pitch, grounding their bats behind the opposite crease. Each crossing and grounding by both batsmen is worth one run. The batsmen may attempt one run, multiple runs, or elect not to run at all. By attempting runs, the batsmen risk dismissal, which can happen if the fielding team retrieves the ball and hits a wicket with the ball before either batsman reaches the opposite crease.

If the batsman hits the bowled ball over the field boundary without the ball touching the field, the batting team scores six runs and may not attempt more. If the ball touches the ground and then reaches the boundary, the batting team scores four runs and may not attempt more. When the batsmen have finished attempting their runs, the ball is returned to the bowler to be bowled again. The bowler continues to bowl toward the same wicket, regardless of any switch of the batsmen's positions.

After a bowler has bowled six times (an over), another member of the fielding team is designated as the new bowler. The new bowler bowls to the opposite wicket, and play continues. Fielding team members may bowl multiple times during an inning, but may not bowl two overs in succession.

The inning is complete when 10 of the 11 members of the batting team have been dismissed, one always remaining "not out", or when a set number of overs has been played. The number of innings and the number of overs per inning vary depending on the match.