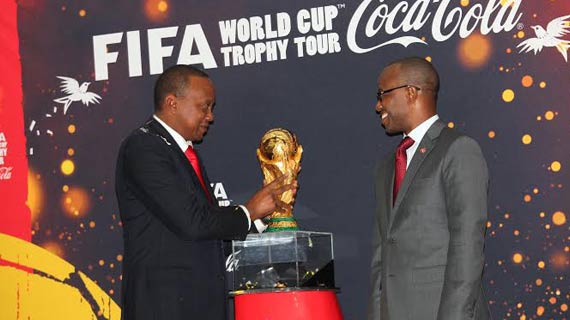 The FIFA World Trophy left Kenya on Saturday for neighboring Tanzania after spending two days in the country.The trophy arrived on Thursday morning and was received by President Uhuru Kenyatta and Sports Cabinet Secretary Dr. Hassan Wario at Coca-Cola Plaza in Upper Hill.

Thousands of ecstatic Kenyan football lovers thronged the Kenyatta International Conference Center (KICC) to view the authentic, solid-gold FIFA World Cup Trophy on Thursday. The fans, who included the young and old alike started streaming in from as early as 8am eager to take a picture with the global icon.

With the weather permitting, the football enthusiasts lined up in their numbers and were led to a hologram where they took instant souvenir photos. They were also given free merchandize to take home during the day-long event that had lots of entertainment. Performances led by Kenyan rap artist Octopizzo, Wyre, Jaguar, P-Unit, Size 8 and 2014 FIFA World Cup anthem artist, Brazilian David Correy were part of the highlights of the day.

The trophy is on a 287-day worldwide tour touching 88 countries and is meant to give fans an opportunity to experience its presence. The trophy tour in Kenya is part of Coca-Cola’s present to the country as it celebrates its Golden Jubilee.

It will spend two days in Tanzania before traveling to South Africa. The global trophy tour is sponsored by the Coca-Cola company.