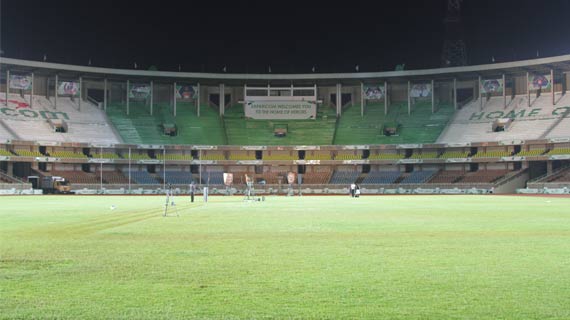 Telecommunications giant Safaricom recently won the naming and branding rights for two facilities at the Moi International Sports Center in Kasarani, mainly the stadium and the indoor arena which were subsequently renamed the Safaricom Stadium Kasarani and the Safaricom Indoor Arena respectively.

While the sporting fraternity largely welcomed this new development, other parties roundly condemned it, citing reasons such as

The loudest proponents of this line of thought are Kenyan law makers. They even went as far as debating it in the August House, evoking memories of 2009 when the then Sports Minister Prof. Hellen Sambili revoked a deal that the SSMB had entered with Coca Cola for the branding, renaming and refurbishment of the Nyayo National Stadum.

Some individuals feel that the Ksh 55m deal is too low.

Safaricom should build its own sports facility

Others feel that for all the profits that the telco giant makes, it should have ploughed its resources into constructing its own facility.

According to Sports Commissioner Gordon Oluoch, constructing a new stadium like the one at Kasarani will cost in excess of 10 Billion shillings, “Stadium construction is an expensive affair. The world over. Branding and naming rights is a concept practiced all over the world and it does not mean the stadium has been sold out. This is a brilliant concept and we would like to encourage more partnerships in order to uplift the standards of our sports facilities.”  Oluoch noted.

According to Sports Stadia management Board public relations Officer Raki Asman, over ten corporate companies applied to be given the branding rights with Safaricom earning the rights in the end after a successful tendering process.

For starters, Safaricom made it clear that the entire complex collectively referred to as the Moi International Sports Center has retained its name. This should allay the fears of all those raising the "national heritage" argument.

You can term this as an apologist statement but the open truth is "national heritage" will not improve the standards of the stadium.

In terms of the amount given to the SSMB, Ksh 55m is in cash while adjustments will be in excess of Ksh 160m. In a day and age where government investment in sports infrastructure is next to zero, this is indeed a shot in the arm and a step in the right direction. It is also sets the benchmark for future initiatives of the same kind.

The argument that Safaricom should build its own stadium is...well...far fetched...how long would it take to build a stadium of Kasarani's stature? Quite a number of years...Safaricom's investment at Kasarani is intended to derive results within a short period of time...results that will be beneficial not only to the organization but the entire country.

The benefits to be derived from an upgraded stadium are far too important to ignore. Kasarani could potentially become the destination of choice for high level sporting and entertainment events, bringing much needed revenues to all concerned parties, whilst exposing the Kenyan populace to the best world can offer, thus improving our standards, not only of play but also of event management and give Kenya the opportunity to bid and host major international events.

If only we could open our eyes and see the bigger picture. There's absolutely nothing wrong with the decision for Sports Stadia management Board to open up a tender and for Safaricom to take up the naming rights at Kasarani.  None whatsoever...