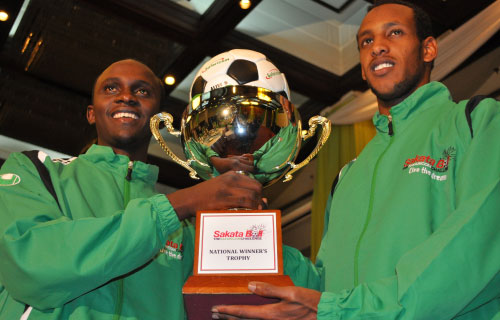 The 2nd edition of the Safaricom’s SAKATA ball challenge has officially been launched and it will be bigger and better with a total of 2,700 teams expected to take part.For the first time, girls will also take part in the 7 months program with a total sum of 3.5 million shillings up for grabs in prize money.This was unveiled on Thursday morning in a Nairobi hotel.

The tournament which is structured in four levels namely, kick off/ mashinani, zonal, regional and national. Save for North Eastern, each of the regions will have 16 centres totaling to 113 centres across the country. All the Logistics and event organization of the entire national tournament will be handled by celebrated national lower league managers Ligi Ndogo Limited.

In this year’s edition, Safaricom will partner with the UNICEF sponsored program of the National Youth Talent Academy where a total of 22 player’s scouted from across the nation will be selected to join the Talent academy development program for a period of six months.

Speaking during the launch UNICEF’s director of children’s programs Mr.Kimanzi Muthengi lauded the SAKATA ball initiative seeing it as an avenue towards the uplifting of the nation’s economy through empowerment of the youth.

“Talent is a path of regenerating our youth in this nation and we should put all our efforts in nurturing the same. I thank Safaricom and Sakata ball challenge for the initiative and for us under the talent academy we shall work hand in hand to ensure we give our youth a better chance.” Said Muthengi.

Among the SAKATA success stories is Abdul Malik Mohammed who was scouted in last year’s edition in Isiolo while playing for Tarqwa high school. Abdul Malik joined the national youth talent academy in its pilot year 2010 and quickly rose up the ranks to join the national under 20 soccer team then to Gor Mahia and is currently a member of the senior national soccer team Harambee Stars.Malik is further expected to travel to Sweden next week for trials in a possible move to a professional career with IFK VARNAMO.

“I thank Safaricom and SAKATA for giving me an opportunity to shine where soccer was not expected to flourish in Isiolo. I promise to give my best and to offer what I can to be able to give Kenya a better name and also open ways for my people back in Isiolo as a place full of talent.” Said Abdul Malik.

Speaking during the launch event also attended by the Commissioner of Sports Mr. Gordon Oluoch, Safaricom Chief Commercial Officer Peter Arina said the 2011 tournament is far bigger than last year’s with a larger Kenyan footprint  in terms of number of regions to be covered, teams and the prize money at stake. More importantly is the bigger opportunities for the best talent to further pursue their soccer career through professional training at the Unicef National youth Talent academy.

“ For the second year running, Safaricom will be going round the country-mashinani  in search of the finest football talent. After a very succesful Sakata Ball 2010 campaign, we promise to continue providing a platform through which our Kenyan soccer talent can be unearthed and presented to a national audience with an eye on life-changing opportunities; and nurture Kenya’s next generation of football superstars.,”said Mr. Arina.

Other than the cash awards, all participants in the league will benefit from Safaricom branded merchandise among them branded full kits among others .

The seasons first regional finals are planned for Machakos (Eastern Region) on Saturday 19th and Sunday 20th February at the Kenyatta Stadium from 8.00am. Preparations for the same are in top gear.