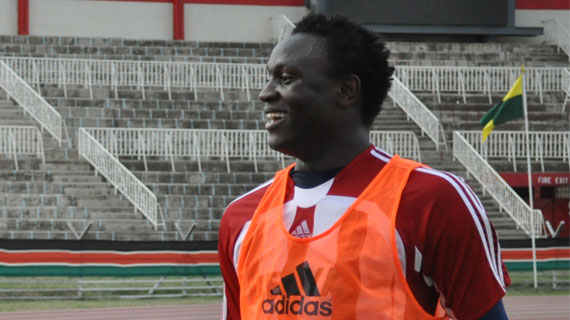 The rumor mills have been awash with stories linking Kenyan midfielder Victor Wanyama to EPL giants Manchester United and Arsenal. Reports from reputable publications indicate that the two clubs have on several occasions sent their scouts to watch the 21-year old in action for Celtic.

Victor Wanyama's last two years sound like a fairy tale. Two seasons ago he was playing in the Belgian Pro League with Germinal Beerschot. Rumor mills linked him with clubs like Aston Villa but Celtic had the last laugh after snapping him for less than a million quid.

Wanyama, the younger brother of Inter Milan’s star Macdonald Mariga, lived up to the pre-transfer hype as he went on to become a crucial member of the Celtic's Scottish Premier League winning squad. In the process he also bagged the young player of the month for December and several man-of-the-match awards. For a player mainly deployed for duties minded player, scoring four goals in a season was another great achievement. His name dominated the headline and the big boys began to notice.

Manchester City, QPR, Newcastle, Liverpool have also been linked with the Kenyan international but lately Manchester United and Arsenal have been the two clubs touted as Wanyama’s likely destination. A move to Manchester United, (skip this red devil faithfuls) would not be the most ideal place based on Sir Alex Ferguson’s history with African players. Besides, the midfield is a bit parked for Wanyama to cause an immediate impact.

A few weeks ago, Daily Mail reported that Wanyama was being considered by Arsenal as a likely replacement should Song leave. Now the inevitable has happened and Song has left for Spain giants Barcelona

Mugubi is a bully in defense and powerful in defensive tackles. His strength and defensive intelligence has been rated among the best in Europe currently and can easily fit in the void left by the departed Alex Song. He is currently valued at £5-8 million, a figure even the non-spending Arsene Wenger won't have to break bank to find following the proceeds from the sale of Robin van Persie and Alex Song.

For a starter, the loss of Alex Song could prove worse than that of the aging Robin van Persie as he was one of Arsenal’s mainstay last season. Just like Song, Wanyama is versatile, aggressive and a great ball distributor. His physique and eye for goal would prove a great asset for the trophy hungry gunners.