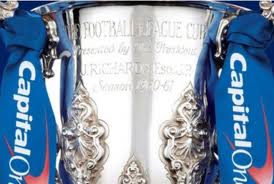 There’s been so much hot air emanating from all quarters since the final whistle was blown at Stamford Bridge in the top-of-the-table EPL clash between heavyweights Chelsea and Man United; alleged racist slurs, some poor officiating decisions and storming of the referee’s room by any one in Blue. So much hot air it’s easy to forget that football has been going on, as was evidenced by the thrilling encounter between Reading and Arsenal last night that produced 12 goals.

Controversies are usually everywhere, and, depending on which side you are on, you’ll feel aggrieved or relieved. Emotions make people, players included, see things from their own binoculars, and all we can hope for is that the Mark Clattenburg Show will come to an abrupt end. Football has to take centre stage once again, as the Blues and the Red Devils face off in a relatively inferior competition on the same ground for a place in the quarters.

Given that a sumptuous game awaits us at Old Trafford at the weekend, be sure that tonight’s Capital One Cup affair will witness changes in the starting lineup deployment, with reserve players being given a run out. Unless of course Chelsea will want to take their ire out on the Mancunian’ second string and revenge on what they feel was a robbery on Sunday night, with an equal piece of the 6-0 pie they served Wolves in the previous round.

The West Londoners may opt to bring in the likes of Romeu, Bertrand, Turnbull, Marko Marin, Victor Moses, Azpilicueta and Daniel Sturridge, amongst other possible changes. As for United, Sir Fergie may put a complete starting XI with the likes of Chicharito and Welbeck leading the side, aided by Nani, Anderson, Fletcher, Buttner, Wooton, Keane and Powell, etc.

The last time these two sides met in the League Cup was back in 2005, when a transformed Blues’ side got the better of the red behemoth in the semis. In the last five matches in all competitions between these two sides, United have won four times with one draw. Roberto Di Matteo will want his second string to act as the avengers, but they must not get carried away, as a defeat will mark the third consecutive loss for the league’s table toppers.

The other two matches on the night are also all-premiership affairs with Liverpool playing host to Swansea at Anfield and Norwich welcoming Tottenham Hotspurs to Carrow Road. Let’s hope that the tie of the round at the Bridge will not disappoint.