One on one with SuperSport’s Thomas Mlambo 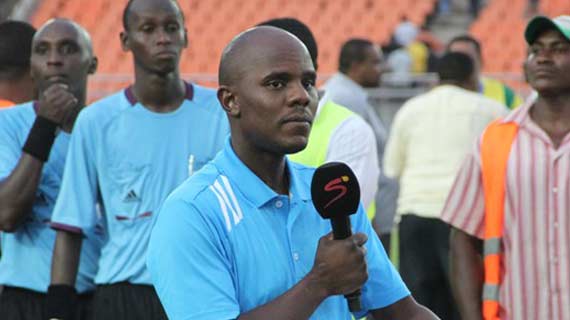 One on one with SuperSport’s Thomas Mlambo

Thomas Mlambo in Tanzania during the CECAFA club championships

By TIMOTHY OLOBULU 03 Aug 2012
He is a soccer icon in the African continent; a lover of the game and a true son of motherland. A budding footballer whose career was cut short by a knee injury. South African SuperSport presenter Thomas Mlambo ditched his first degree course in law at third year to pursue his other passion for the beautiful game in the media.

Michezoafrika.com caught up with the African soccer icon and were lucky to get an exclusive one on one interview with him.

“I always loved football and I was stopped from playing after I got a knee injury. I used to stay at home and my parents pushed me to look for something to do. I bumped into a newspaper article some day and there was this advert of a company looking for a Television Sports Presenter. I said why not! After six months, I got the reply that I was considered for the job.”

That is where the great success story of Mlambo starts, at 21 in 1998 when he started working for the South African Sports Television Company.

He has seen it all in terms of the growth of African soccer. From when there was almost no interest from the outside world in the African game to now when playing in Europe is no longer considered as a huge prestige.

“The interest in African football has grown. Before, African players were never considered as great, save for a few. But right now, we have the biggest players coming from Africa. The interest has grown and we have SuperSport covering almost all major leagues on the African continent. The passion for the game has also increased so much due to the increased coverage. This is what was lacking before,” Mlambo notes.

“The quality of play has increased tremendously. The sponsorship package of the leagues has become heavier and players  don’t have to go to Europe to earn fat pay cheques. They get that under their roofs.”

Don’t over emphasize on senior teams.
He sees Africa as a great continent endowed with huge talent but has poked holes in the Federations’ over emphasis on Senior teams and forgetting to invest in Youth development.

“We have great players in Africa with immense talent. The problem with us is that we put too much emphasis on the senior teams forgetting that we need to focus on where this talent is coming from. Youth development is the key to making African Soccer great. If we can teach these young boys soccer from a tender age, getting to the Youth ages they will be hot property. Federations put Youth team coaches under so much pressure for nothing. That should not be the case; the youth teams should be given a chance to learn under no pressure,” he adds.

Mlambo has also stressed the importance of professionalizing leagues run across the continent noting that currently, football is not just any other sport but also a business.

“Football is now a business. We need to get professionals to run federations and leagues as opposed to bringing people who only have passion for the game. Yes, passion is great but we need people who can manage funds well and who can invest in soccer’s rich dynamism,” Mlambo advises.

Kenya’s problem
Mlambo is no stranger to the Kenyan game and he agrees that the country has some of the best players in the continent, he however says Kenya’s short coming is what he terms as an East African problem.

“Kenya’s soccer is slowly taking shape at least we do not hear of FIFA camping in Kenya threatening sanctions. Of course there are teething problems like the one we recently saw on AFC Leopards and Gor Mahia but at least it is getting somewhere. SuperSport has made things better because the league has gained in popularity and more fans are now coming into the stadium and the passion is increasing”

“The national team Harambee Stars has very good Quality players and they only need to get the structures right and put a few things in place and they will be somewhere. I believe they can be in the African Cup of Nations and even the world Cup. I am looking forward to seeing them there.” Mlambo acknowledges.

World Cup 2010
The World Cup Bonanza at his own home turf in 2010 still remains sealed in his heart as one of the best ever moments in his life.

“I was with the team all through from when we started bidding, moving throughout the continents looking for votes and finally that day in Zurich when the paper was lifted and South Africa were named the hosts. It was unbelievable listening to the first whistle for the South Africa vs Mexico match. It was an honor witnessing that and more so being involved with the process all through. It was a baby that I saw being born and I witnessed it being raised. After the World Cup, FIFA indeed acknowledged that the 2010 SA World Cup was the best organized in history.”

His challenges; “It is a challenge always getting to know everything about all the African Nations concerning soccer. There are problems such as language barrier but I am glad that through the help of a few people in different countries, I have managed to maneuver and find my way out.”

Mentorship
He plans to soon start a mentorship program where he hopes to impart the knowledge he has acquired over the years to other journalists across the continent.

“It is an idea I have been toying around with. I have also received quite a number of requests in various countries to go and do workshops. I would like to share my experience with other journalists and impart the same knowledge to them hoping they will be better.”

His advice to anyone pursuing dreams in life; “Never let anyone tell you that you cannot do something. Never, never ever give up. Keep knocking on all doors, don’t sit down with your dreams do something and learn as much as you can. Also, hard work is key. Put in your best in everything you do and aspire to better your best.”