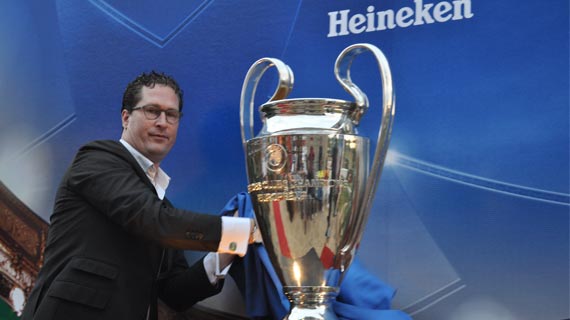 Their decibels may be getting louder in domestic football, but last season’s Champions League debut against Bayern Munich and Napoli was a whisper for Man City. But if the nouveau riche Mancunians had thought that last season’s group of death was as bad as they could get, things have certainly got worse for the English champions. And that is just an understatement.

Facing Real Madrid, Borussia Dortmund and Ajax Amsterdam is a nightmare, not a dream, for a team looking to be considered an European giant. If Roberto Mancini had thought his team wasn’t good enough for this season’s honors, he has only today to make his summer buys before being handed a Spanish appraisal.

September 18th, 2012, the men floating in Arabian oil begin their continental pilgrimage at the cauldron of Santiago Bernabeu, against 9-time European champions, Real Madrid. If you saw the first half of the second leg of the Spanish Supercopa between Los Blancos and Barcelona on Wednesday night, you’ll have an idea of what lies ahead for Roberto Mancini and his Millionaires Club of superstars. The blue half of Manchester must have had a torrid time sleeping last night.

Coached by the ‘Only One’, Jose Mourinho, Los Merengues will provide the sternest of tests that the Citizens can ever fathom, without including the mighty men from Catalunya. If the Bavarians schooled the Citizens last year, your guess is as good as to what the Castillian giants, seeking a La Decima crown, will serve the Sheikh Mansouri-owned club. And what a sight that would be.

Mancini knows it, and so does Chairman Khaldoon, that without additional personnel in his squad, with facing  a group that includes 1997 winners and Bundesliga holders, Dortmund, not forgetting Dutch champions and four-time European winners, Ajax, even matching last season’s third spot finish may be hard to come by. Like sand through the hour glass, so are the days of Man City’s quest.

Cross over to the red half of Manchester. United are grinning sheepishly at the sight of City’s woes, what with the Red Devils facing Portuguese side SC Braga, Turkish champions Galatasaray and minnows from Romania, CFR Cluj. Top spot and knockout phase may seem secured by Sir Fergie’s charges, but they just need to be reminded what transpired on their road to Thursday Night Football last season.

Having being grouped together with the likes of Benfica, FC Basel and Otelul Galati, the three-time winners were humbled in the most excruciating of ways. This time round, the red behemoth faces similar teams, with the legendary Scot gaffer hoping his team doesn’t make absurd errors like in last season’s outings. Will the clock strike twice?

With Arsenal in need of locating their goal scoring boots before the visit to Olivier Giroud’s former club Montpellier, and Chelsea looking impressive in their quest to become the first side to defend its European crown, lifting the Big Ears trophy at Wembley Stadium, the Venue of Legends, on 25th of May, 2013, is the ultimate prize for the big kahunas of European football.

But for Man City, a visit to the outskirts of the stadium on their frequent visits to London during their Premiership travels may be as good as they get. Well, unless proven otherwise.