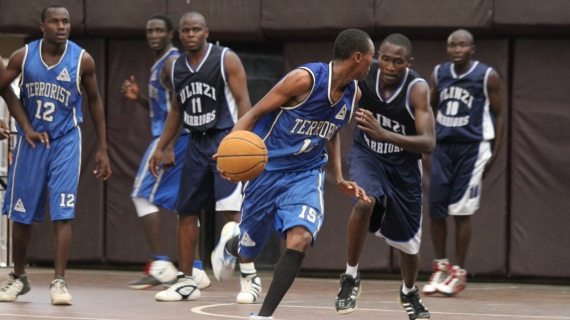 Ulinzi Warriors had an easy time when they faced University of Nairobi ‘Terrorists’ in the Kenya Basketball Federation Premier League. They beat the students 71-47 on Sunday afternoon at the Nyayo Gymnasium.

Ulinzi who had their characteristic physical play dominated the match winning all four quarters. In the 1st quarter they managed to hold off the students with an 11-8 win then proceeded to take the 2nd quarter with 18 points to Terror’s 16 points. This put the half time scores at 29-24 in favor of the Defence Forces side.

The half saw Terror lose the ball through the many turnovers they had in their own half and at the same time Ulinzi’s Geoffrey Mwaniki was a constant threat with the 3 point shots. In the 3rd and 4th quarter Ulinzi stamped their authority with a 26-10 win in the 3rd while the last quarter saw them get 16 points to Terror’s 13 points and take the day.

The win was Ulinzi’s third after seven matches and they have frog jumped the students in the table standing. Ulinzi so far has 10 points while Terrorists have 9 points with both teams having played 7 matches.