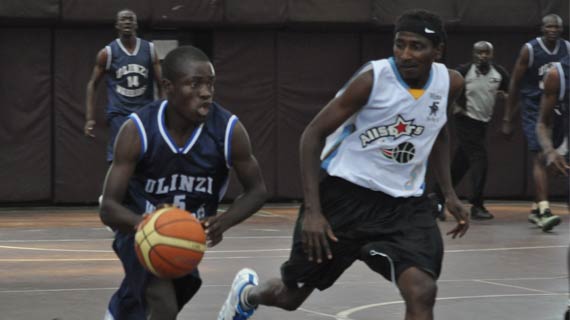 Ulinzi vs Thunder at Nyayo

The return of Victor Odendo to Ulinzi Warriors side added more grip on the soldiers defense that came handy in helping them strike Thunder 66-55, a game the soldiers dominated in the second quarter to stamp their control over Thunder.

Ulinzi won the first quarter 16-12 before bottling Thunder in the second quarter winning it out 21-10. Thunder's attempted to rally from behind to pull a shocker on the soldiers who seemed to have their defensive game back, but their efforts were each time watered down by the soldiers who controlled the game despite losing the third quarter 15-17.

Thunder staged little fight in the final quarter slowing down the game with several fouls hoping that guards Dan Okwiri and Griffin Ligare would drill three point shots but neither seemed to have his touch outside the arch. Ulinzi still lost the quarter a narrow 13-14, an insignificant score to settle the final tally.

Victor Odendo led the soldiers’ onslaught with 13 points while guard Ligare had a low 8 points for his side.

The final game, a repeat of last year's finals turned out to be a one-sided affair with defending champions COOP Bank beating USIU 58-36 dominating the entire game. COOP Bank drew the first blood in the game that was expected to be charged with Allan Ouma's back to back shots within the perimeter whose response was a three point shot from Chris Mulumba.

COOP went ahead to win the first quarter 17-14 and the second 13-5. Tigers' defensive prowess was on the spot in the second quarter failing to contest shots from COOP besides being bullied on the board.

COOP Bank extended their dominance over the varsity side that showed urgency, to stage a come-back stretching their lead with a 14-8 win in the third quarter followed by 14-9 in the final quarter to the upset of fans who anticipated the affair to be closely contested.

Bankers' duo of James Mwangi and Allan Ouma had 10 and 8 points respectively while Tigers' Yonny Wanambiro and Chris Mulumba responded with 5 and 7 points each.