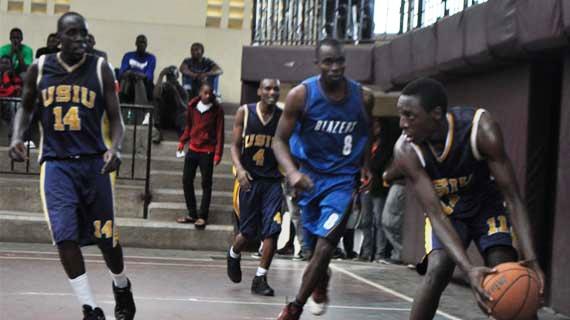 Tigers against Blazers in a past match

The USIU men’s and women’s teams, Tigers and Flames will be travelling to Mombasa to face the Kenya Ports Authority teams on Saturday.

Flames will be going up against the KPA women’s team from 2:00pm at the Makande gymnasium. The runners up of the 2012 season lie 2nd in the table standings while KPA follows in 3rd place. Both teams are tied at 10 points each after 5 matches played.

A win for either team will push them to second place behind defending champions Eagle Wings. In the event of Eagle Wings losing to Mennonites in Nairobi, the victor in Mombasa will be tied at the top of the standings with 12 points alongside the defending champs.

Tigers on the other hand will be up against the KPA men’s team at 4:00 pm at the same venue. The hosts lie in 8th position with 8 points after winning three of their five matches. Tigers are placed 11th with 7 points just in front of bottom placed league newcomers Nairobi Aviation after playing four matches which they have lost only one of them.