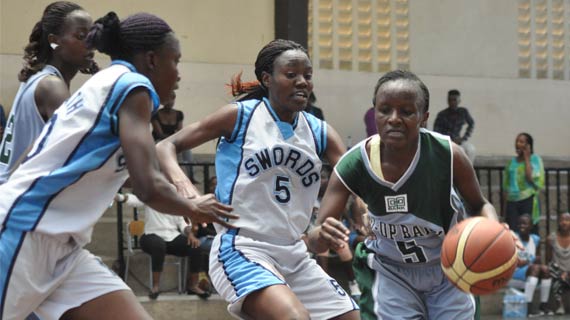 COOP Bank became the latest victims of a surging Strathmore Swords who needed an unexpected three-point shot from Manuela Biel in the final seconds of the fourth quarter to win the low scoring affair 39-37.

Swords, in their traditional defensive style condemned Kingdom Queens 11-8 in the first quarter that saw an exchange of baskets before turnovers cost Queens the lead.

The second quarter was characterized by defensive battles with neither sides burying a basket in the first four minutes of the quarter, that was  however dominated by COOP Bank mostly on the board to win it 5-7 to cut the students' lead to half a basket at halftime.

Swords continued their domination over the bankers in the third quarter winning it out 10-8 setting stage for a fourth quarter that was open to both sides to wrap up the game.

Kingdom Queens now relying on Linda Alando appeared to be headed for a win twice taking a one-point lead in the final quarter causing tense moments both from the stands and benches but Manuela turned out to separate the two sides, nailing a three point shot that turned out to be the difference between the two sides.

COOP Bank's attempts to pull a shocker in the last ten seconds of the game were frustrated by Rachel Opinya who cornered Alando from the bankers back court to wind up the clock slightly after the half court.

Manuela led her sides scores with 14 points while Alando had 9 of COOP Banks tally.