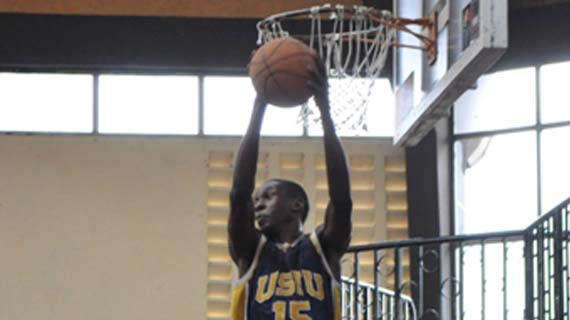 There was a multitude of scenarios that were possible in Game 1 of last season’s first round playoffs between Strathmore Blades and USIU Tigers, an evening that represented a precious opportunity for the Blades to transform their gritty, gutty season into a truly special, memorable one for their fans who had been upset every time the two bitter rivals met.

That ruse was necessary, apparently, because Blades had exhibited an annoying tendency of failing to grasp the urgency of closing out on their rivals for two seasons now. That was one option.

Another was, Tigers would restore their pride and continue with their dominance over Blades for the second season in a row and particularly in the playoffs. Arou Ramadhan Chan and Evans Leting were determined to condemn Strathmore to a loss that was painful and disappointing. Tigers did it in that painful style. On that night, when Blades were trailing by a basket and had possession with less than twenty seconds to wind up the game, David Ogolla was forced to a turnover by Evans Leting who drove straight to the basket to separate the contested tie by four points.

On that night, guard Nick Konya became a revelation while Neville Odhiambo’s dunk on Clifford Alella is still remembered to date.

Here's the one irrefutable thing about the then Tigers: They were a marvelous, athletic basketball machine when they were in front, running, dunking and scoring. And here's one irrefutable thing about the then Blades: They didn’t have enough weapons to erase double-digit deficits late in ballgames. That was then and any Blades fan who was in the court left upset hoping their team would stage a comeback in game two that would never be…..that was then.

These two sides meet this weekend. Blades are in a ten-game winning streak while Tigers have had a series of mixed fortunes. But this is a derby. When these two sides are mentioned in a possible matchup, every fan stops and listens.

This game brings the sort of matchups that the game of basketball wants in terms of rivalry, scores to settle, talents, hard work, fans screaming their hearts outs….name it. Blades catch a break in that Tigers don’t have a true centre to give them the match-up problems like Arou used to a season ago.

Frontcourt players like Joseph Owino and Pascal Nabwana are therefore off the hook. Against Victor Bosire, pressure will be on David Ogolla to corner him and stop his unexpected shots. Ogolla will have enough supports from his team if their previous games are to go by, so he doesn’t need to play above his head.

Tigers’ basic formula boils down to technically-sound team offensively from their trio of Bosire, Chris Mulumba and veteran Yonny Wanamabiro and one auxiliary weapon pitching in Kelvin Kigotho to put them over the top. Blades must protect the ball and not turn this into an ugly half court dogfight. The prospect of any team losing this game isn’t likely to sit well with them so the atmosphere at the gymnasium is all going to be thick both for the fans and the players on Sunday from 4pm.