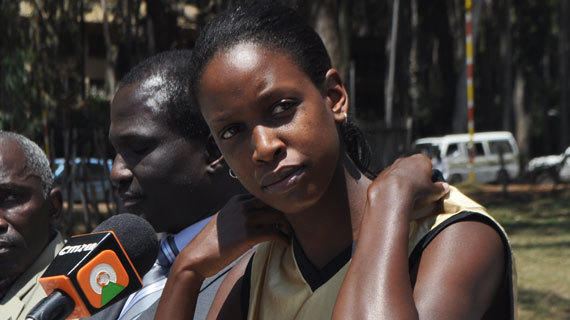 Kenya women basketball captain Silalei Shani has announced her decision to quit basketball. Silalei who was also a member of the self supported Eagle Wings Basketball team says she has lost motivation to play basketball in Kenya despite her dedicated passion for club and country in the past few years since returning from  studies abroad.

She blames the Kenya Basketball Federation officials of taking advantage of players both at domestic club competition leagues and national teams, “I have decided to take a break from Kenya basketball.” She says.

“There is no motivation to even wake up the following day and head to the court because of the insensitive officials who don’t care about the development of the sport. The officials are too corrupt and are only keen to take advantage of the players with an excuse that we are supposed to play for passion.”

She adds that players in the domestic league are also very frustrated because they play for nothing other than the love of the game. “We actually play for nothing in the league. At the end of the busy season there is nothing to show or appreciate the hard work by the players and many are of the opinion that it’s not even worth it.”

Silalei was the team captain to the national squad that took part in the 2013 Afro Basketball Competition in Maputo Mozambique. Since returning from Maputo over five months ago, the players are yet to receive any cent from the Federation in form of allowances.Michezoafrika.com has also seen a letter written to the cabinet Secretary Dr. Hassan Wario by a section of  players requesting him to intervene and also inquiring on the whereabouts of the said allowances.

“I even wrote a letter to the Federation chairman and officials on behalf of my fellow players requesting information on the whereabouts of the allowances but to date nothing has happened. Besides allowances, we don’t even have kit or shoes to play with as a national team. No one has motivation to turn up for the national team anymore because it is just an embarrassment instead of being a patriotic thing.”

Silalei adds that overtime, she has spent her own money going for training and sacrificed her employer’s time to travel with the team for international matches but cannot continue in the same way especially considering she represents other players who are unemployed, “I don’t think it’s worth it to sacrifice my own money and employer’s time for federation officials who take advantage of us in the name of patriotism. There are girls in the national team who are patriotic and love playing for the flag but then cannot even raise money for their own sanitary pads forget about transport to trainings yet no one cares. I think I cannot stand and be a part of this anymore and it is time for me to quit.” She adds.

But when reached for comments over the same development and allowances clarification, KBF Treasurer Peter Orero said, “National team players are not entitled to any allowances. They are supposed to play for their country and we make that very clear when we appoint them to the team. As a federation we try as much as we can to ensure we send teams to all international matches.”