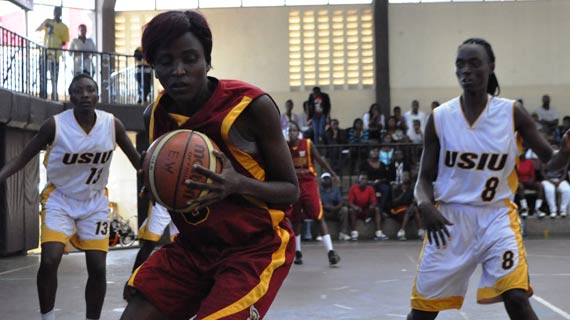 USIU Flames on Sunday afternoon proved their mettle with a well deserved 63-51 ( 11-13, 14-07, 22-12, 16-19) win over defending champions Eagle Wings; a win that ensured the students booked a finals spot in this year’s KBF Classic league where they will meet former champions KPA.

With three wins out of five matches, the hot Flames qualified with a 3-1 best of five series triumph over a limping Eagle Wings who will now head to Morocco for the African Championships as semi finalists in the domestic campaign.

USIU lost to the same Eagle Wings last year in the finals and according to star player Hilda Indasi, they are more determined than ever to win this year’s edition for the first time in history, “I am so proud of my team mates’ achievements in the semi finals. We have surely come from far and I am impressed with the ever hardworking spirit from the girls. We played against a very solid team in Eagle Wings and beating them in the semis is one of the greatest achievements for us.” She says.

Flames won game two 70-57  to force a 1-1 tie after Eagle Wings opening win, then later  crippled the Eagle Wings dominance with a  51-60 third match win before  creaming their qualification  on Sunday.

Experienced players Hilda Indasi and Emma Nyakweba led the Flames to the victory over Eagle Wings with each scoring 15 points. Angela Okoth had 16 points for Eagle Wings.