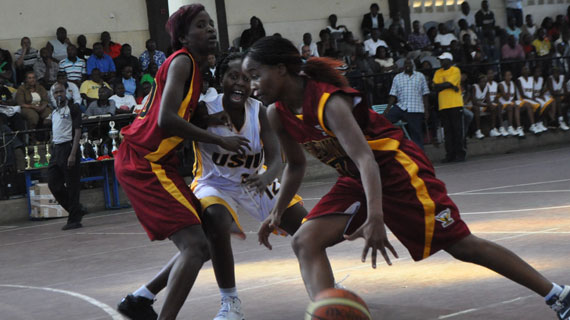 Eagle Wings began the game picking a narrow first quarter lead of 18-16 before the students assembled themselves for a fight in the second quarter winning 10-15 and take a three-point lead at the halftime breather.

The third quarter was a closely contested affair with the sides trading baskets at the early stage of the quarter. Flames extended their lead to five- point lead causing a scare in the Eagle Wings bench as Flames showed no signs of relenting in the series of attacks that were led by Hilda Indasi and Emma Nyakweba.

A timeout bailed out Eagle Wings as they forced the students to three consecutive turnovers that were rewarded by two baskets to cut Flames’ lead by four points.

Eagle Wings went on rampage in the final quarter bullying USIU on the board while knocking prime baskets that stretched their lead to twelve points .Hilda’s experience came in handy to her side as she orchestrated her side’s efforts of pulling a late come-back though  it was not enough as it reduced Eagle Wings lead to six points awaiting game two tomorrow.

Eagle Wings’ duo of Samba Mjomba and Vilma Achieng  buried 18 and 14 points respectively while Hilda and Nyakweba had 22 and 11 respectively.