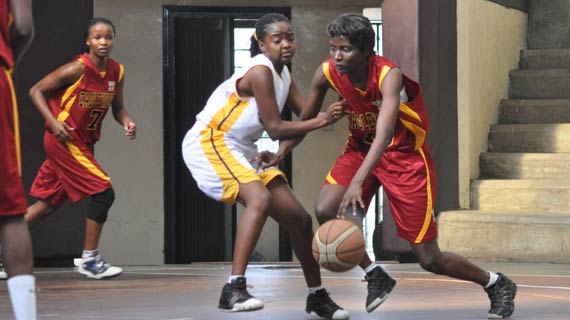 Eagle Wings vs USIU on Saturday

Defending champions Eagle Wings made it a double win over the weekend bringing to a halt Strathmore Swords winning streak with a deserved 63-31 win over the students.

Keen to avoid any upset, Eagle Wings controlled the game from onset winning the first quarter 16-6 followed by a 15-9 win in the second.

The students were made to wait for close to six minutes into the third quarter to bury any basket against wings who were now bullying them on the board and on the floor.

The third quarter was again tilted in eagle Wings’ favor with a 17-3 win that was summed up with a 16-13 win, the highest Swords got into the game, thanks to a sharp-shooting Tanya Ogwel.

Angela Okoth hit 16 points for the winners while Swords’’ Manuela Biel had 11.

In an earlier game, USIU Flames led by guard Cynthia Irankunda staged a superb second half display to avoid a second loss of the weekend beating Storms 69-54. The high scoring game was evenly contested in the first half with a 14 ups tie in the first quarter before Storms took a narrow 13-14 in the second quarter heading for the halftime break.

Flames then assembled themselves for a battle in the third quarter ripping Storms defense with passes from Irankunda  that were rewarded by easy layups by her teammates to snatch the third quarter from Storms who were also hungry for a win at 23-15.

Storms were to be on the receiving end again in the final quarter soaking in 19 points with a reply of 11 to give the students a fifteen-point win.