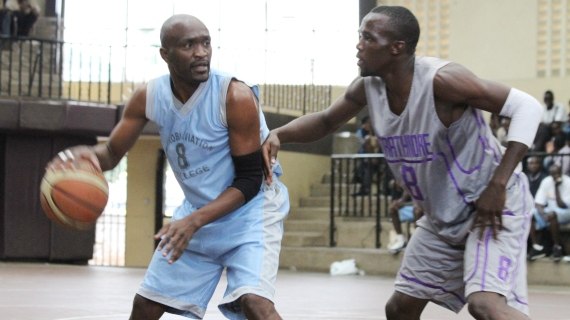 Strathmore University ‘Blades’ pulled a remarkable come back to beat fellow students Nairobi Aviation 61-59 in the KBF Premier league on Sunday afternoon at the Nyayo Gymnasium.

Aviation who gained promotion from Division One this season had led the Makadara based Blades in the first three quarters but after intense pressure in the last quarter gave up their lead and lost their sixth match in the league. The first quarter saw Aviation take a two point lead the scores being 11-9.

Strathmore seemed to have lapses in concentration in the quarter as they failed to recover back in defence whenever they attacked and most of their shots went off the rim. The situation was more of the same in the second quarter where they lost out to Aviation once more getting 11 points while their opponents managed to sink in 19 points. This put the half time scores at 30-20 in favor of the league newcomers.

The 3rd quarter saw Aviation capitalize on 3 point shots and widen the gap with 18 points in the quarter while Blades garnered 13 points to put the total scores at 48-43 with Nairobi Aviation still leading. It was in the last quarter that Aviation had a string of turnovers while at the same time Strathmore pushed with high paced attacks that they succumbed to an 11-18 loss.

Blades made good use of the rebounds they secured in the quarter with Aviation clearly looking exhausted and this ensured Tony Ochieng’s side took home the 2 league points. The win sees Strathmore move to 4th in the table standings with 12 points after 7 matches. Aviation so far has 8 points from the seven matches they have played.