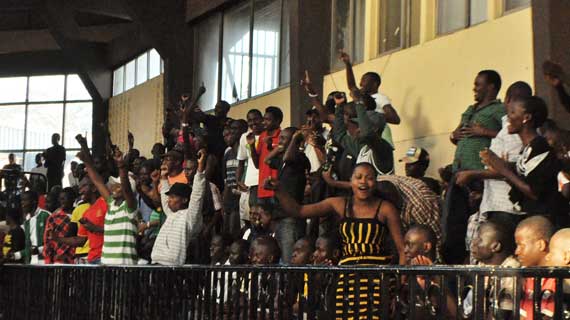 BASKETBALL fans at the Nyayo gymnasium

Kenya Basketball players will this morning hold a press briefing in Nairobi at the Nyayo stadium to protest the decision by the Kenya Basketball Federation to unconstitutionally hold an Annual General Meeting among other burning issues.

The players have harshly contested the issuance of the AGM notice without audited accounts which for many years have always been presented on the floor of the AGM without giving members time to peruse through the federation accounts.

Sources within the KBF executive also indicate some members of the executive have not even had an opportunity to see the audited accounts before the AGM to be held at the same Nyayo stadium venue later on Saturday afternoon.

Speaking to michezoafrika.com, the players’ meeting convener Dennis Dikembe says the management of basketball I Kenya is at its lowest and needs action from all stakeholders to save the game from sinking deeper, “Enough is enough help in the fight of this menace. Let’s all come out and help basketball from sinking to abysmal depths in our beloved Kenya due to mismanagement by dysfunctional KBF executive committee.” He said.

The players claim KBF have clearly flouted Article 17 of the constitution which clearly states that “ b) At least 21 (twenty one) clear days notice of the meeting shall be given to all members and such notice shall specify the place, date and time of the meeting.The accidental omission and/or failure to notify a member, or the non-receipt by any member of the said notice shall not invalidate the proceedings of the meeting. All notices shall be accompanied by a copy of the audited accounts of Federation for the period ending 31st December.”

However in a rejoinder KBF Treasurer Peter Orero said the federation has sent out audited accounts to all team managers and branches officials who will be attending the meeting on Saturday dismissing the players’ claims as malicious agendas by their political rivals.

“Players are supposed to play basketball and not to become politicians. The audited accounts are with the team managers and the AGM will go on as planned whoever has questions should present them at the AGM Meeting.” He said.

Auditors
1. The auditor shall be appointed by the Council. All the Federation’s accounts, records and documents shall be open to the inspection of the auditor at any time. The auditor shall examine such annual accounts and statements and either certify that they are correct, duly vouched and in accordance with the law or report to the Federation in what
respect they are found to be incorrect, unvouched or not in accordance with the law.

2. A copy of the auditor’s report on the accounts and statements together shall be furnished to all members at the same time as the notice convening the Annual General Meeting is sent out. An auditor may be paid such fees for his duties as may be resolved by the Council appointing him.