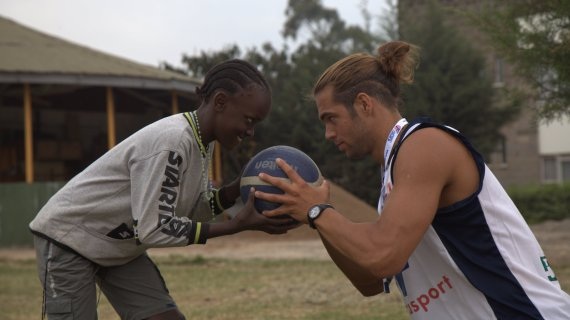 Basketball is a game synonymously associated with slam dunking. According to Wikipedia a slam Dunk is a type of basketball shot that is performed when a player jumps in the air and manually powers the ball downward through the basket with one or both hands over the rim. This is considered as a normal field goal attempt worth two points if successively converted. The term Slam dunk was coined by Los Angeles Lakers announcer Chick Hearn prior to that is was known as a dunk shot

Slums Dunk is a misspelling of the word Slam Dunk where Slums refers to the less privileged areas of residence, generally speaking of any marginalized area or community of the continent. Slums Dunk binds basketball practice and social inclusion for marginalized basketball coaches and players. The project aims at youth development through quality basketball and life skills training camps done all over Africa.

Both projects aim at using sports as a tool to easily transmit culture, life skills and values to youth coming from the slums and the disadvantaged areas of Nairobi and Kenya at large.

The slums dunk project was born in 2011 from the will of a professional basketball player called Bruno Cerella and his friend Tommaso Marino to help disadvantaged youth through basketball practice. Bruno and Tommaso contacted Karibu Afrika to create a project to be implemented in Kenya with the aim of exporting it all over Africa. The 2011 and 2012 Slum Dunk editions have involved more than 500 youths and 40 coaches in their camps.

The 2013 Slums Dunk Project will take place from 10th to 22nd June in Nairobi at Utalii Sports Ground and will foresee a 10-days-camp for basketball coaches and under 21 players coming from the slums and the marginalized areas of Kenya. The camps aim at empowering youth, both boys and girls, through the sport practice. In 2013 edition Slums Dunk will be implemented also in Zambia.