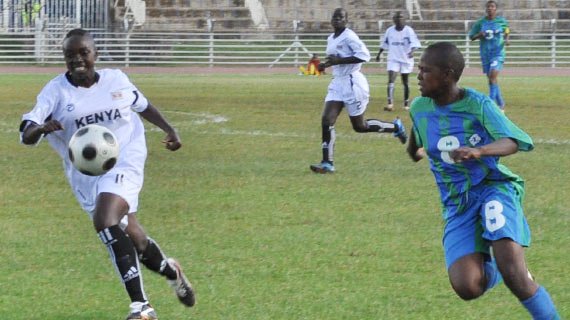 The Under 20 Zambian women soccer team Head of Delegation Nelly Miamba has declared that the team is going for nothing short of a win when they play their Kenyan counterparts in the return leg of the Qualifier for the 2013 U20 Women World Cup.

The team carries a 2-1 advantage from the first leg going into tomorrow’s second leg encounter at the Nyayo National Stadium.

“We are going for a win and I believe that our opponents Kenya are a good team but my girls will use their experience to eliminate the resilient Kenyan side. We really played well in the first leg in Lusaka and I am not surprised that we won the match and I believe tomorrow will not be different.”  Miamba said after the team had their only training session at the match venue.

“I am grateful for the hospitality that we have received from the Football Kenya Federation. The team held a light training at the Marist University grounds and another at the Nyayo Stadium. It is a good pitch and the climate in Kenya is very similar to ours back in Zambia, so I expect the girls will adapt well and play good football.” she added.

The Zambian camp is blossoming full of confidence and would like to build on the success of the Zambian senior men’s, Chipolopolo who were crowned African champions in the just conclude AFCON in Equatorial Guinea and Gabon.

“It was a great achievement for our nation to win and be crowned African Champions and it is a challenge for the team to perform well and I believe that is victory motivation enough. That can propel the girls into success because in football there is no small team or big team, it is about preparation, commitment, teamwork and hard work. I know my team possesses all these qualities and winning tomorrow’s match is not an option but mandatory” she concluded.

The match will kick off at 4pm