We want to go to the World Cup – Coach Adhiambo 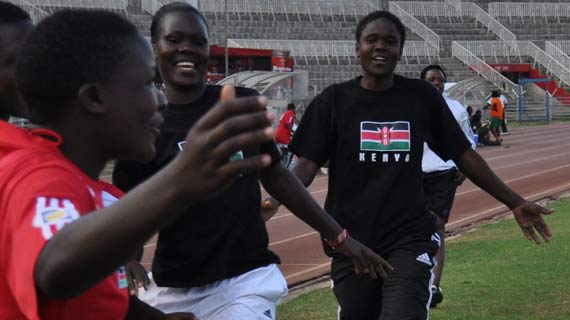 We want to go to the World Cup – Coach Adhiambo

Kenya under 20 women coach Florence Adhiambo on Saturday afternoon guided her team to the third round of the 2012 FIFA World Cup qualification with a well deserved 4-0 win over Zambia.

Adhiambo, herself a former Kenyan international was all smiles saying her team rides on prayer , hard work , self belief and discipline. She however warned against celebration yet as there is a hard task ahead.

“We thank the almighty, for the massive win, the girls gave their all.The win is not a fluke but as a result of determination hard work and prayer. This is the best team in Africa and they deserve a place at the world Cup.”She said.

“This is a big day not only for women soccer but for our country because as we all know Zambia is still celebrating their African Cup of Nation’s victory and they came here with confidence,” She said

Adhiambo said that after the win, they will immediately draw their attention to shaping up ahead of the last round of Qualification against Tunisia.

“It is great because we have stepped beyond the past two rounds against Lesotho and now against Zambia but the task ahead is even harder. I call on Kenyans on behalf of the entire team to offer us more support even in prayer.”

“This is our time and am glad the girls have proved that women football is a sleeping giant in Kenya.” Added Adhiambo while speaking after the match.

The tactician said the major win will send a scare to their next opponents who are also eyeing a slot to Japan for the world cup later this year.