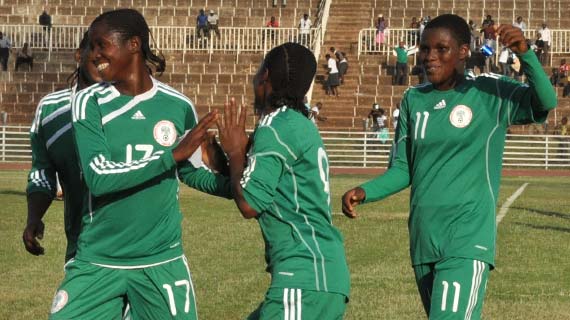 Patience Okaeme scored a brace for her side as the Nigerian Falcons outdid their hosts Kenya in an U-17 world Cup qualifier played at the Nyayo stadium on Saturday afternoon. With two away goals, Nigeria is now a step closer to the next round of the qualifier as Africa seeks to send their representatives to the U-17 world Cup later in the year.

The match had to be delayed for about seven minutes as Kenya protested over the age of the Nigerians.

However after the Nigerians agreed to sign  the protest letter, the match got underway and the Kenyan girls got off to a brilliant start with Joy Wasike threatening the Falcons with a fast break  in the 3rd minute but her attempt  was off target as it went wild.

Nigerians looked masculine, tactical and more powerful on the balls but their Kenyan counterparts did not give them an easy opportunity either.

Despite a balanced first quarter where both teams dominated in the midfield, Patience Okaeme dampened the home fans ‘ spirits with an easy goal in the 25th minute following a goal mouth melee.

Kenyan keeper Awinja Metina was called in for a crucial save in the 25th minute with  a lovely stop from a close range Okaeme strike.
Okaeme was again on the mark in the second half with an easy finish in the 68th minute as Nigeria ended their Kenyan assignment smiling with a two away goals advantage.

Speaking after the match, the Kenyan coach Fred Serenge blamed the loss on poor concentration in his back line “Those were very easy goals gifted to them by the slow reaction from our goalkeeper though she also had some moments of briliance.Generally the girls played well and am impressed. We just need some time to seal our loopholes and am sure we will have a better outing in the return leg.” Said Serenge.

The second leg match will be played in Nigeria in a fortnight.