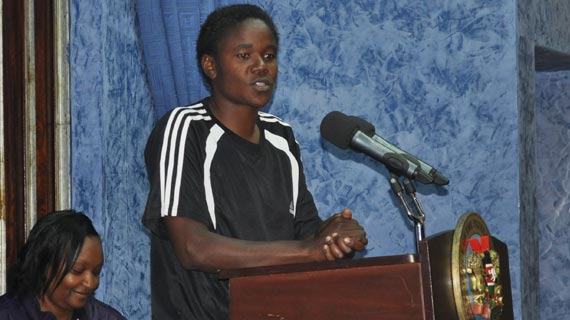 The Kenyan Under- 20 women soccer team head coach Florence Adhiambo has said her team is determined to make history by beating Tunisia and heading to the final stage of the U-20 FIFA women’s world Cup.

The tactician said that what the girls need more is support and motivation now that they are on the verge of a historical world cup appearance.

“A few months ago, nobody knew about this team , majorly because they came from humble backgrounds and their talents  were rotting away , but now, they have proved to the world that they are a force and worth a good mention. These are just but part of the many young girls out there who need exposure and more exposure.Recently the U-17 girls also did very well though they were eliminated by Nigeria, ” she said

The former Kenyan International added that even the media is partly to blame for lack of coverage opting to cover other  games involving the national teams and neglecting the upcoming talents, and in particular women soccer

“Most Kenyans have no idea there is an U-20 women’s soccer team, It’s my plea that the media plays their role in developing us, Sometimes these girls feel unappreciated when nothing is mentioned about their efforts, give us the platform and we promise not to let you down” she said

Her words were echoed by team captain Terry Ouko who said that the team needs more exposure specifically international friendly matches so that they can be prepared for harder games ahead.

The team on Wednesday received a major boost after Prime Minister Raila Odinga gave the team half a million shillings while Fidel Odinga bought the team training soccer boots worth 200,000 shillings.

Kenya plays Tunisia on 31st of March in Nairobi and a return leg in Tunis two weeks later.If Kenya sails past this stage then they will meet the winner of the match pitting Ghana and South Africa in the final round.