Injured Zambian keeper out of danger 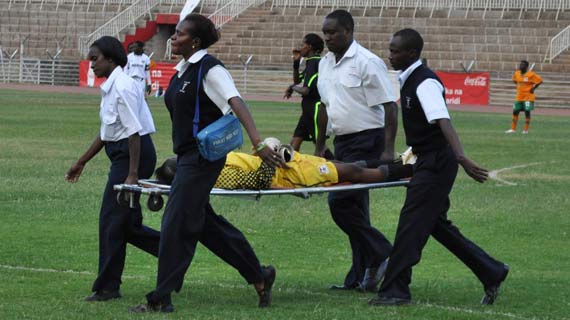 Injured Zambian keeper out of danger

Zambia’s technical bench has assured there is no cause for alarm on their injured goalkeeper who was rushed to hospital after suffering a mild concussion during Saturday’s FIFA U-20 World Cup qualifier against Kenya at the Nyayo stadium in Nairobi.

Delly Lumwaya was rushed to the Nairobi West Hospital and scans conducted revealed that she only suffered soft tissue injuries and was treated and  later discharged from hospital on Saturday night alongside another team member who also suffered a twisted ankle during the match.

“It looked bad when she was stretchered off the pitch with an injured neck but scans revealed both injuries were not very extreme.They can can both be discharged from hospital. The defender  twisted her ankle but they have both been treated and they are out of danger.” Said the Zambian assistant coach Patricia Mkwasa.

Delly who was superb in goal in the first half had conceded twice and her substitution destabilized her team since they had already exhausted their substitutes forcing defender Sophani Banda to take her gloves.

Zambia eventually lost the match 4-0 in Nairobi and 5-2 on aggregate following their 2-1 win in Lusaka a fortnight ago.