From West Pokot with a super goal 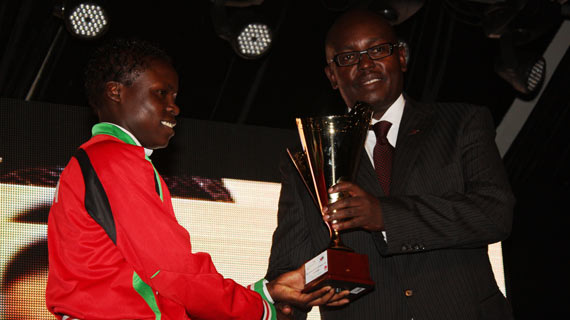 From West Pokot with a super goal

She is fast, intelligent and sly on the ball. Tartar girls’ high school forward Neddy Atieno scored Kenya’s third goal in a magical manner dribbling past four defenders to burry home a well curled goal from 20 meters to extend Kenya’s lead to 3-0 against Zambia in an U-20 FIFA world Cup qualifier played at the Nyayo national stadium on Saturday afternoon.

Kenya went ahead to win the match 4-0 and qualify for the next round on a 5-2 goal aggregate.

Atieno while speaking after the match praised team work and determination for working magic for the girls who will stop at nothing but ensure they book a ticket to the world Cup in August.

“This is a great moment for women soccer in this country. We will stop at nothing but ensure we are in Japan come August. I feel good to have contributed towards the success of our team. This is as a result of hard work and determination. We thank all those who have been close to our team supporting us and giving us moral strength.” She said.

Atieno who served as team captain of the Kenyan team is a student and member of Tartar Girls High school soccer team from West Pokot, the reigning soccer champions of the Kenya Secondary School’s Sports Association national games.