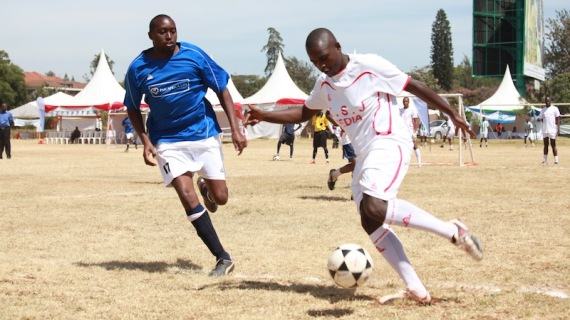 Two quick goals, scored by Naivas  Peter Muema and Derrick Odera in the 4th and 17th minute gave the home side a deserved lead before Amos Abuga  pulled one back for the media side in the 44th minute from Steve Obuya’s solo effort for a  2-1 first half score line.

Coached by Joseph Irungu, Naivas picked from where they left in the first half by going ahead in the 56th minute through David Rodgers who bundled home the third goal with a rasping shot that went past KSJ Keeper Vivian Akinyi.

KSJ  who were held to a 4-4 draw last weekend by Maringo Bombers briefly recovered in the second half before Abuga netted the second goal after combining well with Erick Ochieng,Steve Ayoo,Jamal Mwengi and Obuya.

Naivas  who had earlier  defeated Amazon Tigers from Rongai 2-0 at the same venue made  an astonishing comeback  giving KSJ  breathless moments  with two of their attempts hitting the post.

KSJ who reinforced their side in the second half by making several substitutions missed two clear chances with speedy Obuya rounding the home team defence in the 78th minute but his effort narrowly missed the target.

Nevertheless,Obuya made his presence felt when he scored the third goal for KSJ in the 80th minute  with another solo effort that underlined him as the man of the match.

Naivas  side  however appeared  dominant in  ball possession and were rewarded in the 65th and 85h minute when Jimmy Gitahi and Martin Kimani put the final icing on the cake to complete a perfect Easter holiday  for their side.

Naivas coach (Joseph Irungu) observed  after the match that his  youthful side used the two weekend friendly matches as part of their preparations ahead of the forthcoming Nairobi county League which they are aiming to register .

Against Amazon Tigers,Naivas Supermarket  scored their two goals through  Rodgers David in the 60th minute before  Fred Magige extended his team’s lead with  a 65thminute  free kick.