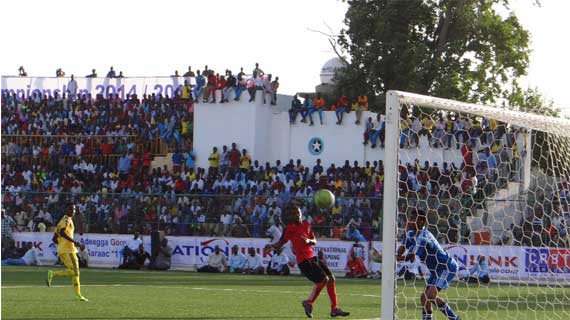 With still having one match left for them, Banadir Sports club confirmed their title of Somalia’s Nation Link telecom championship after defeating Gaadiidka by 2-1 on Monday.

The yet, unbeaten Banadir Sports Club could have even won the trophy if they drew as they needed a single point to confirm their league title, but fought harder than ever before to win.

Both teams exhibited very professional and more competitive game, as Gaadiidka was running to escape from relegation to Division B, while Banadir S. C was committed to accumulating the three points that win of a football match brings.

However, Banadir Sports Club celebrated their league title on Monday as they still have one match ahead. Banadir who is still unbeaten is scheduled to play their last match against Savana on Sunday 6th of April 2014 according to the schedules of the competition.

Savana is already Division B as they have only one point with two matches left for them.