Successful Coaching by the Book seminar ends in Nairobi 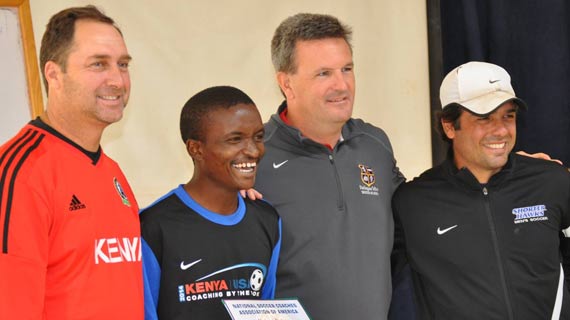 Successful Coaching by the Book seminar ends in Nairobi

For the third year running, the Coaching by the Book coaches training program concluded at Word of Life Kabete in Nairobi where 43 coaches drawn from different parts of the country converged for a whole week of football coaching.

This has been a three year coaching training program where coaches were taken through several level of coaching from the technical development to match related training combined with whole life coaching.

Speaking during the graduation, Chris Millhouse expressed his delight in seeing the level of networking amongst the coaches since 2012, “In the definition of success, I no longer see 40 individual coaches in this room but rather I see a family of coaches caring about each other and ready to go and make a difference in their community. We are glad to be part of this process.”

Among the participants was first timer Charles Okwemba the AFC Leopards’ midfield kingpin who expressed his excitement in being part of the class of 43 who graduated last weekend’ “Iam grateful to be part of this program and I wish I would have been here from the beginning however God has a purpose for me to be here now. This is my first ever coaching course and I can see the intensity of the training program and more important the holistic approach of the course which speaks directly to one’s life: He said.

Coach Chad Liddle expressed his satisfaction with the performance of the coaches and challenged them to put in more if they aspire to become better coaches. “ whenever you step on to a soccer field you have to wear a coaches hat and some of us here have to ultimately become different people on the soccer field, you need to command authority and communicate well as these are key ingredients in making a good coach” said the experience instructor.

The training was hosted by a network of sports organizations in Kenya working with grassroots sports within several communities led by Godfrey Masolo of 365 Events and invited coaches from over 6 counties with some as far as Dadaab and Zambia.