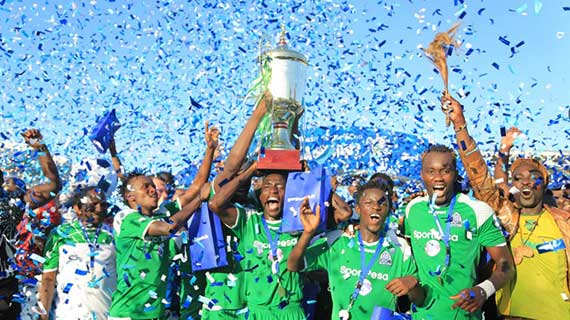 MASA FC thrashed Nai Bees, a team comprised of Street Boys, 5-0 in an entertaining constituency semi-final match played at the Makongeni Grounds in Makadara on Sunday.

Kevin Liyala opened the scoring for the Makongeni-based side in the 5th minute and the game went into the breather with no other goal scored.

Brian Kabila scored the second at the hours mark and the flood gates opened from then with Eugene Wethuli, Brian Musa (2 goals) scoring the third, fourth and fifth goal in the 76th, 83rd and 85th minute respectively.

“The Super 8 Tournament is a very good tournament as it ensures the grassroots teams compete in an organized manner hence preparing them well for professional football,” Mwangi said,

“This is the first time we have participated in the tournament and we have learnt very crucial lessons. We will be back stronger next time,” he added.

MASA FC will now face Jericho AllStars  (who beat Bahati United in the other semifinal played earlier in the same venue) in the Makadara region final.

A total of 12 matches were played in different venues in Nairobi on Saturday.

The Technical University of Kenya (TUK) FC was the biggest winner on Saturday, beating Umeme Bees 7-

Four Pre-Quarterfinals matches were played at the Riruta Stadium, famously known as the BP Grounds.

Two semifinal matches were played at the famous Red Carpet Grounds in Babadogo.Githurai Sports edged out Riverside Lions by a solitary goal in an entertaining match that kicked off at noon while Babadogo United and Sao Paulo shared spoils, 1-1 in the other semi-final. The former (Babadogo United) won 4-3 on post-match penalties and will face Githurai Sports in the Kasarani region final.

The final in Embakasi will be a Kayole affair after Kayole Asubuhi and Kayole Youth secured their slots in the final after the semis played at the Dandora Stadium. Kayole Asubuhi thrashed Soweto Hope 4-0 while Kayole Youth registered a 2-0 win over Tena United.

Two pre-quarterfinals matches were played in Westlands on Sunday.

Kabete United and Shamako Babes are through to Westland region quarterfinals.

Rongai AllStars deservedly beat More Fire Sonia 3-1 in the third place playoff match at the Woodley Grounds in Kibera.Diguna FC will face Toi Market FC in the final of the Langata region.