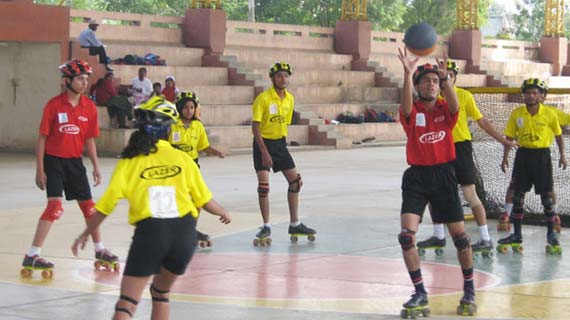 Still a new concept in Kenya, Roll ball has slowly started gaining popularity amongst the few people who have heard about it.The game was invented in 2003 by a sports teacher, one Mr.Raju Dabhade in Pune, India. The main aim of the game is shooting a ball into the opponent’s goal while skating. The game has 12 players on each side with 6 playing on the field at any single time while the other 6 are the reserves.

The game is usually played on a concrete surface but can also be played on an ice rink but in this particular case using ice skates rather than the roller skates. The court is about 28/40m in length while the width is 15/20m.

The game is played by both hands but using your single hand is also acceptable. The ball is dribbled on the surface just as in basketball/handball. Kenya has already an established team that went to India last year to participate in a tournament.

Speaking to michezoafrika.com the coach Tobias Onyango who also doubles up as the Kenyatta University handball coach said that the game is picking up well in Kenya and soon it will be a popular sport acceptable by many,

‘’the game is new but we have really improved compared to when we started .We got a lot of exposure in India.’’ The coach also urged more Kenyans to take interest in the game, ‘’ it is a very interestinggame to play and also watch and would recommend more people to join the game’’.

The Kenyan team has 16 players so far and they train at the Nairobi University sports grounds on Sundays.