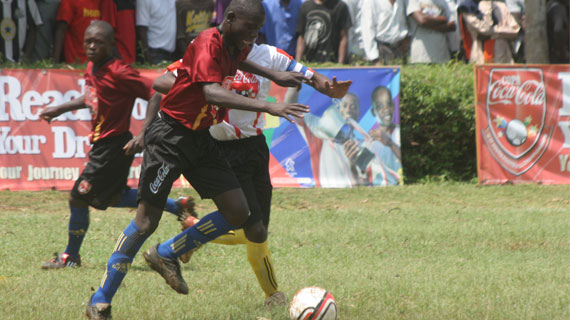 Western provincial champions, Murhanda Boys began their campaign with a 2-1 win over Tana Boys as the under-15 national championships entered day two at the Hope Center in Kawangware.

The Group ‘B’ topdogs were involved in an even battle with little separating them until the dying minutes when Tana conceded a penalty which was drilled in with consummate exposure by Murhanda’s Benson Anguva.

Tana leaped in front with five minutes on the clock, Hillan Kesi slicing open the Murhanda defence before slotting home to put the Coast outfit ahead.

The early morning shower rendered the pitch slippery but that didn’t deter the young boys from entertaining the crowd with swift moving football.  Murhanda piled on the pressure for an equalizer but their efforts were thwarted by the opposition goalkeeper.

A flurry of corners however gifted Murhanda a chance to level and so they did, Elias Shitambasi letting fly from outside the area to make it 1-1 heading into the interval.

The second half was equally even with neither teams having the cutting edge to hurdle ahead. However, with two minutes before the final whistle, the referee gave Murhanda a lifeline after gifting them with a penalty which Anguva expertly converted.

The win puts Murhanda at the top of Group ‘B’ which also has defending champions JMJ who drew 1-1 with Angaza in the first match.

Kitale Youth were on song against Tharaka Stars handing the Eastern champions a 4-0 humbling. Elly Saenyi opened the scoring for the Rift Valley side with Eric Wafula doubling the lead before the breather. Saenyi netted his second with Kennedy Mwendwa’s stunning strike in stoppage time completing the rout.

On Wednesday, defending champions JMJ Academy will be back on the pitch when they play Tana Boys in a must win match for the both sides. Murhanda will face Angaza as Tharaka lock horns with Young Muslims.

Nyamira Ladies versus Mombasa Starlets, Maragwa versus Kirindara and Kibra Queens against Cherangany will be the ladies’ matches