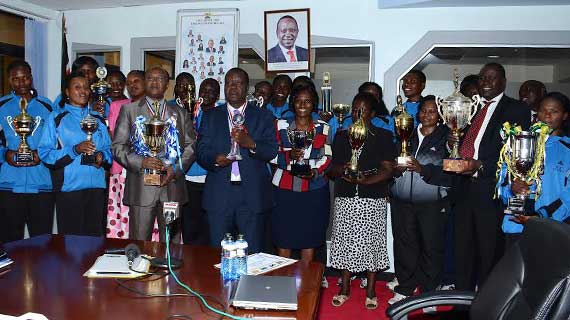 MOICT who were placed third in the last World Club championships held in South Africa were tyeing 20-20 with their Ugandan rivals at the breather.

MOICT who have won the national league title three times in a row have never progressed past the semi finals since they started participating in the regional championships three years ago where they have always been eliminated by NIC.

In the semifinals, MOICT blanked Uganda Prisons 38-34 a NIC breezed past Tanzania’s Jeshi la Kujenga Taifa-Msambweni 35-15 to have a date in the finals.

The Kenyan side emerged at the top of pool ‘B’ with eight points by pipping KCCA 37-35, then beat JKT-Msambweni 42-35 before handing Mafunzo 37-32 defeat and eventually overwhelming KVZ 46-36.

The Cabinet Secretary for Ministry of Communication and Information Technology Dr Fred Matiangi said they are committed to supporting the team and praised the club for bringing glory to the ministry and the country.