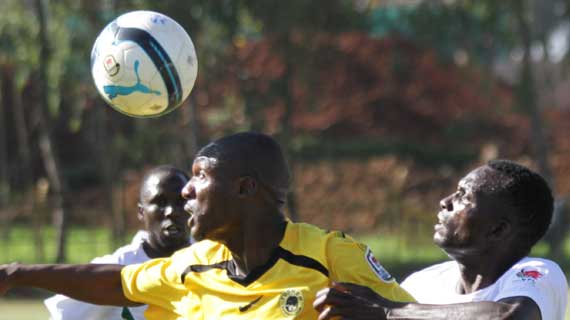 The eagerly awaited first semifinal match pitting Kaloleni based A 1000 street against Borussia FC on Saturday was abandoned in the  75th minute at the Ziwani Umeme Grounds in Nairobi county.

Trouble began when A 1000 street netted what appeared as a genuine goal through a powerful header  by  former Tusker midfielder Jeff Oyando from Clifford Alwanga’s set piece but their opponents’  fans invaded the pitch protesting the goal.

The fans claimed the linesman had already flagged for offside but the match officials unanimously concluded it was a clean goal.

It was disaster at the pitch with tempers flaring high with a section of Borussia fans threatening the referee, identified as Abedi with dire consequences if he accepted the goal.

The situation turned tragic as a plain clothes policeman was forced to fire in the air to cool down tempers and bring order in the pitch. Rowdy fans had to scamper for safety. There was more drama when a man riding a motorbike stormed inside the pitch and went  straight to hit the referee who had to run for his dear life.

Matchwise, it was a tension packed thriller that could  have  gone either way.Borussia  who featured majority of Gor Mahia Under 19 players took their more experienced opponents head on.Led by Bandari
Goalkeeper Wilson Oburu who played as a striker,the Katanga/Majengo based side received thunderous  cheers  from the packed pitch with their brilliant display.

By the time of going to the press,it was not clear whether the match will be replayed or the Kaloleni side  will be  awarded the match.

The second semi final match pitting Pumwani and home team(Nyoi FC) was slated to be held  yesterday(Sunday) at the same venue.

The finals will be held on Saturday January 10th at the  same venue where the winner will pocket a cool shs.100,000 with the runners up picking shs.75,000.Third  and fourth winners  will receive Kshs.50,000 and 25,000 courtesy of sponsor’s GoTv channel.