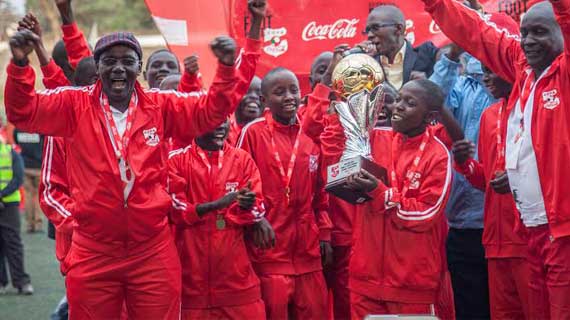 Led by their coach, John 'Ingwe' Barasa, the contingent of 14 players are in Pretoria where they are expected to enhance their knowledge in different aspects of the game.

"We are extremely delighted to have gotten this opportunity and the boys have been really looking forward to this day," said Barasa who guided the team to victory in the national finals held in Nairobi in August.

"It's almost unbelievable what the little boys have achieved in such a short time they have been together and also given their humble backgrounds in Transzoia County. We will strive to make our country proud," he added.

Kitale earned the right to represent Kenya in this year's boot camp after edging out Kisumu Lakers 5-4 in post match penalties in the finals played at City Stadium.

All the 14 players who were part of the title-winning side got themselves on the plane. They included the 2014 MVP Kennedy Mwendwa, golden boot winner Elly Saenyi who is the captain, custodian Dan Wamalwa and pint-sized wideman Maxwell Kibet.

"This is a dream come true for me and my colleagues. It is yet to sink in really to most of us that we are going beyond the borders, we are totally excited," said Eric 'Berbatov' Wafula who scored the solitary goal for Kitale in their unlucky 1-3 loss to Sags Academy in a build up match on Tuesday.

The players will participate at the camp alongside East African neighbors Tanzania and Burundi, Central African nation Congo among others.

The one-week camp will be held at the High Performance Center (HPC) in Pretoria and will see teams get expert training from some of the leading coaches drawn from the host country.