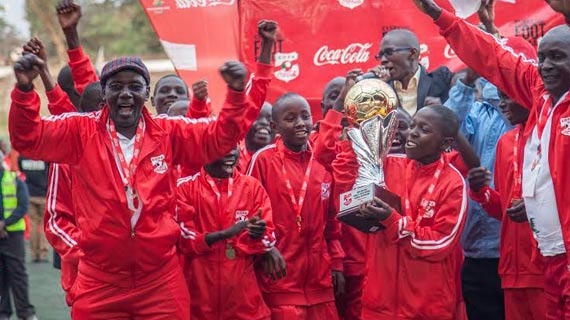 The boys’ final was a tightly contested affair with both teams showing they deserved to be playing the finals.

Kitale who beat the Lakeside outfit 2-0 in their Group ‘A’ clash earlier in the week were quick off the blocks taking the lead inside two minutes, Eric Wafula slicing open the Lakers’ defence before slotting home through the legs of Eric Ochieng in Kisumu goal.

Lakers reasserted themselves thereafter putting the Rift outfit under incessant pressure. They almost drew a goal back when Jack Odhiambo was put through but Kitale keeper John Musumba was quick off his lines to collect the ball.

With ten minutes on the clock, Lakers who lost last year’s final to JMJ Academy found the equalizer. Benson Omalla received the ball from outside the danger area, killed it into his chest before unleashing a rasping shot into the back of the net to draw Kisumu level.

Both teams tightened their backline thereafter but it was Lakers who threatened more. Twice, Omalla found himself in a good position but was thwarted by Musumba as the match ended 1-1 at half time.

Kisumu dominated the second half but could not find the winner sending the match into penalties.

Marvin Omondi saw his penalty saved by Musumba giving Brian Bahati the chance to score and win Kitale the title. The lanky midfielder delivered for Gideon Olando’s men leaving Ochieng stranded and sending Kitale into celebration while Lakers were left to lick their wounds after losing a second successive final.

Shinyalu ended their spectacular COPA 2014 campaign with a winners’ medal after beating Cherangany Starlets 4-2 on post-match penalties to claim the ladies’ title. The Kakamega County queens took the lead early in the first half through Lavendah Lihemo only for Cherangany to equalize immediately through Naomi Jepkosgei.

The match ended 1-1 in full time. Shinyalu converted all their penalties but Cherangany’s Belinda Bright and Jacinta Njeri saw theirs saved by Shinyalu custodian Lydia Mukasia as the Western side won this year’s title after coming third last year.

Beaten finalists Cherangany and Kisumu Lakers had their keepers, Nancy Chebet and Eric Ochieng named the best keepers while the Golden boot awards went to Shinyalu’s Lavender Nalisi and Kitale’s Elly Saenyi, both with four goals as curtains came down on one of the best COPA Coca-Cola tournaments in recent memory.