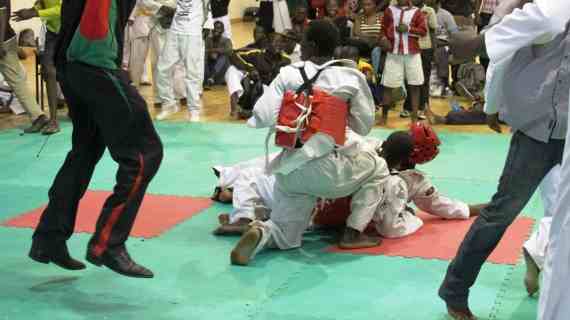 On hand to give Kenya the two Gold medals were Hollins Ochieng  and Isaac Ochieng in the 100+ category and the Under 81Kg categories  respectively.

Kenya’s George Kimani got a silver in  the  100 kg category to give his  country  a  cutting edge. Tanzania  are the defending Champions in this year’s  tournament that has attracted seven countries.They include Zanzibar,Ethiopia,,Tanzania,Burundi,Rwanda and hosts  Kenya.

The event was officially opened  by Prisons Commissioner general Isaiah Osugo who was represented by his  deputy Benjamin Njoga. The commissioner lauded the organizers for fostering good relationship among the neighbouring countries through the regional event and developing talent in Judo.

In attendance was Africa  Zone Five deputy President Valerie Manirakiza from Burundi and the  zone secretary General Shedrack Maluki.The two officials were full of praise with the good turn out  with Maluki pointing out  that it was the first time for Ethiopia to send their team in the annual event.

“Generally, I’m impressed by the turn –out. The event is  so peaceful without protests.Rwanda  who were represented by one person during last years  event have rolled up their sleeves by bringing five judoka’s which is  a  great improvement while Ethiopia have also made their grand entry into the tournament. We have witnessed stiff competition and lot’s of upsets  which is the hallmark of this competition.That shows  Judo has a bright  future in the region”observed Maluki.

Tanzania scooped Gold in the 90Kg through Geoffrey Edward Mtawa while Bigirimana  Hassan of Burundi got silver with Mohammed Hamisi  of Zanzibar escaping with a  bronze in the category.

In the 100kg,Kombo Massoud of Zanzibar claimed Gold with Kenya’s Patrick Wakaba finished second with silver.