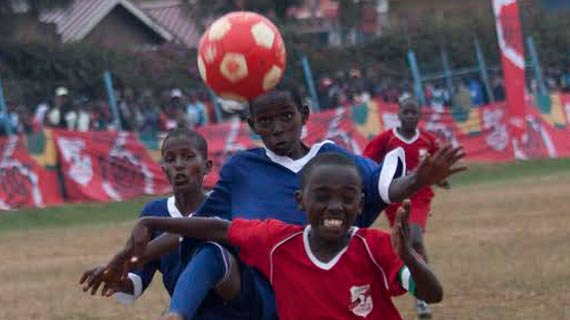 JMJ Academy are glaring at a possible early exit from the ongoing national Copa national Championships after they drew their second match on the trot.

The defending champions  were held to a barren draw by Coast representatives Tana Boys in a tight encounter that epitomized the level of competition in this year’s showpiece.

JMJ’s best chance of finding the back of the net came early in the first half when they earned a penalty off a handball incident. Edwin ‘Drogba’ Okoth stepped up but blasted his effort over the bar.

Buoyed by the presence of Garsen MP Ibrahim Feni who traveled all the way to support them, Tana kept the reigning champions at bay till full time. JMJ must now win their final match against table-topping Murhanda Boys to have any chance of making it to the semis.

Elvis Shitambasi moved top of the goalscoring chat after netting a hat-trick in Murhanda’s 4-1 battering of Angaza Youth which saw the Western side book their slot in the semis. Valentine Kuyanda also found the back of the net with Moli Galgalo scoring the consolation for Angaza.

In the last games in the group, Tana will clash with Angaza Boys with both teams still having a chance of making it into the semis should either of them win and JMJ lose to Murhanda.

While the defending champions were having a hard time in their clash, the team they beat last year Kisumu Lakers, and newcomers, Kitale Youth became the first batch to enter this year’s semifinals after they won their opening two matches in Group A.

Lakers who lost 3-1 in last year’s final to JMJ piped Young Muslims 1-0 to guarantee them progress having also won their opening clash against Tharaka 2-0. Franklin Otieno scored the solitary goal in the dying minutes to give the Lakeside outfit a much needed win heading into their top of the table clash against Kitale.

Kitale top the Group ‘A’ standings on six points, same as Lakers but with a superior goal difference. The Rift Valley outfit thrashed Tharaka 4-0 eliminating the Eastern provincial champions in the process. Kitale and Isaiah Opiyo’s Lakers will clash in the last game of the group to determine who finishes at the summit.