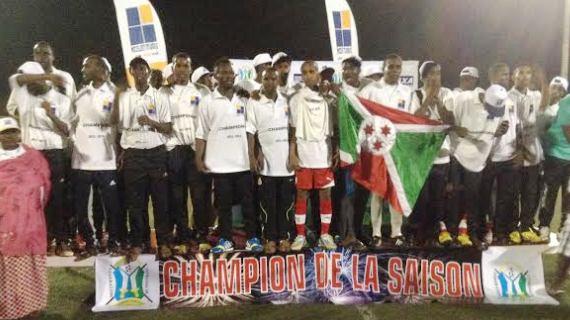 Djibouti Football Federation has concluded its division A football league of the year, with Djibouti Telecom FC winning the competition. The team already confirmed their league title, but it thrashed the University team by 4-1 in its final match played at the technical centre facility.

Djibouti Football Federation president Souleiman Hassan Waberi presented the trophy to the wining team during a colourful ceremony at the National technical centre on Saturday.

“I congratulate you on your victory after a long struggle and hard-work” president Souleiman said as he presented the trophy to Djibouti Telecom’s captain on Saturday.

The president praised local sponsors and the government of the republic of Djibouti for their continued role in the promotion of football in the soccer-growing horn of African nation.

The interest of football in the country had unexpectedly increased since the young age president Souleiman Hassan Waberi came to office on 10th of November 2012.

President Souleiman and his committee revived women’s involvement in football, created the nation’s first ever beach soccer tournament and as well as implemented a number of grassroots development programs carried out across the country so far.