Corinthians on a roll in Kibra League 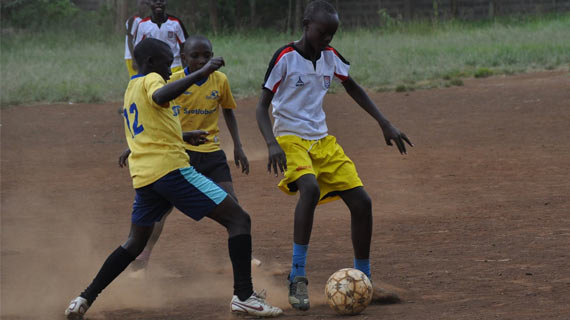 Corinthians on a roll in Kibra League

Corinthians Kept the hopes of clinching the Kibra U13 League annihilating Young Rovers 4-0 in one of the fixtures played at Toy Primary school on Sunday in the Ongoing Kibra League.

Corinthians were dominant with well organised midfield that gave their opponents GFF a torrid time on the pitch opening their scoring in the first half before sealing the day  with three second half strikes.

In the battle of the stars, Starshine were too bright for their host Redstar winning by 2-0 while KML Lost 0-3 to RYSA.

Amazing Grace amazed King Rangers with a 2-0 win.Other categories in the league include U8, U11, U13 girls and U15.

Kibra League which is in its third Season is the largest League in the informal settlements if Kibera with a vision and objectives of bringing together the community through Soccer. It has a total of 62 team of both boys and girls and with its traditional venues being Toy Primary and Ligi Ndogo in Nairobi.