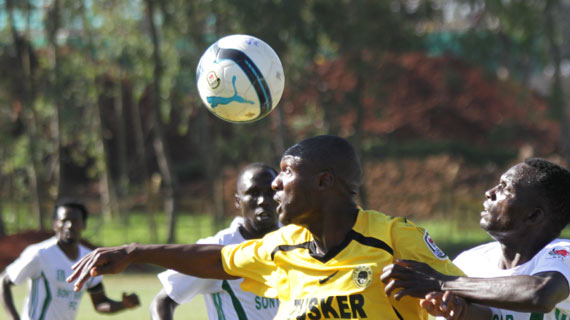 Bedjoes  and Kawangware based Intercity were knocked out of the annual Kothbiro tournament on Wednesday afternoon at the Ziwani Grounds in Nairobi county.

Bedjoes led  by Bandari’s  Victor Ndinya and Posta Rangers new signing Nicholas Ayaga found the going tough when they lost 4-2 through the dreaded penalty shoot-outs to Kaloleni based  A 1000street
after a  barren draw in the  regulation time.

The Kaloleni side led by Mathare United combination of Goalkeeper Peter Odhiambo,Eric Mata,David Ojuang,Vincent Okello and Tusker’s duo of Brian Osumba,and Clifford Alwanga,were too strong for their close neighbours.

The match was marred by too much tension with both sets of fans going for each other’s throttle on several occasion and many side shows on the terraces that forced the match to be stopped on several
occasion to cool tempers.

In the late kick off tie  at the same venue,Ziwani based Nyoi led by Western Stima’s Paul Odhiambo were made to struggle before eliminating Intercity FC  sponsored by KPL’s Frank Okoth 1-0.

Former Gor Mahia defender Chris Wekesa netted the all important goal midway in the first  half with a superb strike that almost brought the roof  down with thunderous  cheers.

Intercity led by  Thika United David Kingatua and Bandari-bound Anthony ‘Muki”Kimani pinned their opponents in the second half in search of the equalizer but the  home team remained impregnable by
thwarting  away all their efforts.

The tournament takes a break before paving way for the eagerly awaited semi finals slated for tomorrow(Saturday) and Sunday.

In  Saturday’s fixture,Borrusia FC buoyed by over five players of Gor Mahia Under 19 will take on Kaloleni based A 1000 street while on Sunday,Wilson Obungu’s Pumwani FC  will lock horns with favourites Nyoi in a match expected to produce fireworks.