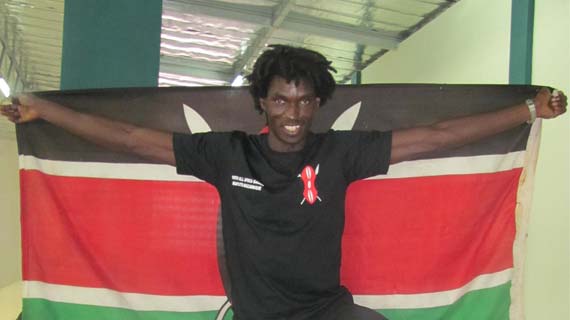 Cajetan Ywaya is a Kenyan international handball goalkeeper plying his trade in Finland and he is no stranger in the local handball scene. Seen by many as a veteran, Cajetan has managed to solidify his position as the first keeper of Finnish side TEAM handball club.

Ywaya has been in Finland since 2007 and has played for two teams so far.  HC West was the first team that he played for and he had two impressive seasons, they were runners up for two years in the Finnish handball league and in the 2010/2011 they finally managed to win the elusive league title.

He has so far started another impressive season with his current side TEAM handball club and they are in the play-offs for the Finnish handball League.

Speaking to MichezoAfrika.com he said that he was happy with the performance of his current side. “We topped the table in our zone that enabled us to play in the play-offs in the main league. We are to play the best of three so far we have lost one but am sure we shall bounce back.’’

On the lifestyle in a foreign country he admits that home is always the best.

“Yes I am comfortable here but home is always the best. You don’t have the sense of freedom that you have while at home. You really need to be psychologically prepared for you to adapt to the lifestyle here.’’

His journey as a handball player started in Aga Khan high then a handball power house in Nairobi province. After clearing his secondary education he trained

with the Nairobi City Council handball team but never got to play any competitive match with them. He then moved to Moi Airbase and turned out for the side for a year. After the stint with the armed forces side he moved to the current East and Central Africa club champions National Cereals and Produce Board handball team. It is while playing for Cereals that he managed to get a national team call up and has been featuring frequently till now.

After some time with Cereals he moved to the now defunct Umeme handball club where he had a short stint with the side then moved backed to Cereals, it’s from Cereals that he managed to move to the Finnish side HC West.

On the standards of handball in the country Cajetan had a lot to say. First he mentioned the lack of competition in the Kenya Handball League.

“The local league lacks competition to the level that is worrying. Teams really need to sit down and think, without competition amongst the teams then the overall standard of the game in the country will also deteriorate.’’

He also pointed out the standards of coaching in Kenyan Handball;

“There is a great need for coaches to be professionally trained. Coaching courses need to be undertaken.  I was at the U-20 Championships last month held a Kasarani and I noted that there was a huge void that needs to be filled in terms of coaching.’’

He continued to add that the current trend in most handball leagues is to carry out professional analysis of matches and also constantly keep statistics.

“Handball as you know is a very fast game, you need to keep tabs on what is happening in a match. For example you need to know where the defensive blunders

are or if it is attacking where the weakness is. In that way, you will know what to correct when you go back to training.”

In terms of the national team he said that the team needs to play many matches with the other teams that are performing well in Africa to boost their playing tactics.

“We have Egypt in the same zone as ours that is zone 5, and as it is known Egypt is a very good side. If we can play many matches with them then our level of playing will also improve.”

Considered as one of the players that have made it in handball, Ywaya had some of advice for the upcoming players.
“You need to have personal discipline and then team discipline; without discipline it will be very hard for you to play handball. Training is a must, you need to train hard if possible train daily and you shall see the results.’’

Having a role model is one factor that he outlined that can help players develop.

“I used to admire one Simon Otieno, every time he was at the posts I made sure that I watched him and I used to say to myself that one day I would like to

play like him or even better and this really helped me. I urge the young guys to look up to someone who they admire in terms of handball and try to learn one or two things from them.’’

Ywaya intends to do a lot for handball in Kenya;

“I want to help improve the game in Kenya. One of the projects I am working on currently is to bring my current team to Kenya at the end of the season for various handball clinics which I know will be of great help.’’

He has also taken up an initiative where the best goalkeepers in Kenya Handball League are awarded presents that he bought.

“As a motivational boost an also my contribution to the growth of the game, I will be awarding presents to those goalkeepers that have outdone themselves in every season.’’

Having been voted the best handball goalkeeper in the 2001 East and Central Club Championship and a force to reckon with in the Finnish handball league, Cajetan has proved that with hard work, determination and desire to succeed nothing is impossible.

His parting shot; “With God everything is possible”