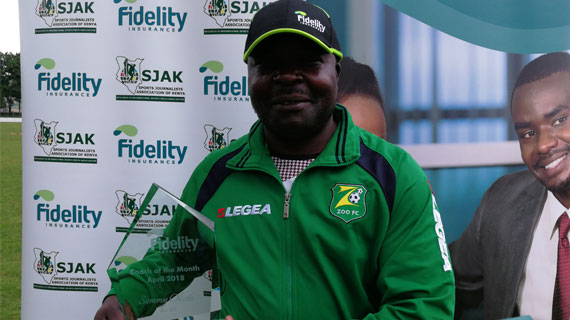 Kericho Zoo coach Sammy Okoth has been named the Sports Journalists Association of Kenya Coach of the month.

A run of three wins, two draws and a loss in the month of April saw Zoo Kericho’s Sammy Okoth pip his peers and earn the Coach of the Month Award. The results saw the Kericho based team pick 11 points out of a possible 18 pitting them as the best performing team that month.

Okoth was unanimously voted for by the Sports Journalists Association of Kenya. Zoo won against Posta Rangers, Tusker and Kakamega Homeboyz  while getting points off AFC Leopards and Bandari. This came after a foul start to the month that saw them lose to Wazito FC at home.

"We really started badly this season but somewhere along the way the player stepped up, we moved out of danger. I never imagined that such a performance could be rewarded as everything we did was for the team to get to a better position, without the award in mind." a jubilant Okoth said after receiving his award from sponsors Fidelity Insurance at the club’s training ground on Tuesday.

"I've never won an award before in my life despite being in football for many years. I'm therefore very excited to get this award. I hope this will motivate the team to continue playing with passion so that we achieve our season target which is a top ten finish," Okoth added.

The players, led by prolific duo of Mike Madoya hailed their coach and tipped the team to see greater success with him in charge.

"I'm so happy that the coach has won this award because of how he has been good to us. He's seen us through a lot to an extent that he's a father figure to me and several other players in the team. The belief he gives us keeps the team strong and I'm happy he has been recognized." Madoya noted.

Zoo are currently placed 15th on the log with 16 points and Okoth who has previously managed Oserian is confident they will avoid relegation and are already scheming for a top 10 finish.