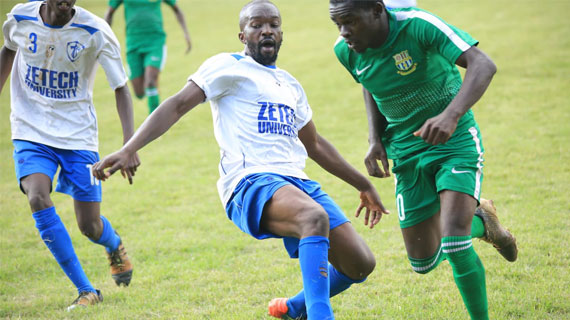 Zetech University on Sunday beat University of Nairobi’s Tandaza side 1-0 in a heated clash during the start of the 2018 SportsPesa Shield FKF tournament.

The Varsity side silenced their opponents 1-0 with a lucky goal by Aron Omari in the 91stminute during extra time to qualify for the next round, in the round of 64 match in what looked like it would end in a penalty shootout.

The Zetech Titans FC Coach Tom Juma lauded the team for a great outing, noting that the team rallied itself steadily to defeat Tandaza to progress to the next round, “It was an intense match given that Tandaza is a strong side, but our patience and hard work paid off to secure a late victory; we are looking forward to an additional win in the next game.” he said, adding that the team will face FriendZone in the national league.

Meanwhile, in the Universities and Colleges Football League, the Varsity’s women’s football side thrashed NYS VTI 3-0 while the provisional team beat Thika School of Medical and Health Sciences 3-1. The Teams’ Coach Bernard Kitolo noted that the teams have been training intensely and approaching games tactfully to secure victories.

The university also secured additional victories in their Basketball league games with the Zetech gents squad beating Barclays Ban 50-46 in the games while the martial arts teams also doubled their luck to progress to the finals in the KATA games during the Universities, colleges and schools tournament after qualifying for the East African games last week in the KUSA finals tournament