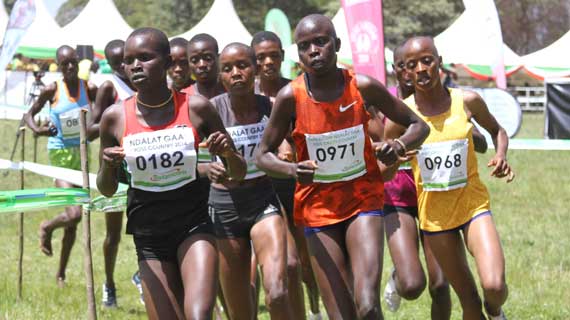 After surpassing eligible age for world under 18 championships, young athletes who represented Kenya at previous event in Cali turn their focus to the world cross country.

The athletes successfully represented Kenya at the 2015 World Youth Championships in Cali, Colombia and are now transiting to the next stage in athletics.

Richard Kimunyan who won gold in 3000m in Cali is now seeking a ticket into the team in junior category together with silver medalist Davies Kiplagat.

Kimunyan whose talent developed at primary school and rocking the international secondary school scene is confident of making it and claiming a podium finish.

“I used to compete in cross country when I was in primary level and I changed to track which I performed well. Now I am back on the grass hoping to shine at the world stage again,” said Kimunyan who completed his secondary studies last year (2016) at Kirobon secondary school in Baringo County.

Kimunyan tested the waters at the competitive Discovery Kenya cross country last month in Eldoret winning the junior cadre race and went ahead to win the Central Rift race.

The reigning East Africa secondary school 10,000m champion is hopeful of qualifying at the national trials.

Kiplagat who is also the Commonwealth Youth 3000m champion is targeting cross country and Africa junior ticket this season.

The 18-year old athlete from Sigowet in Kericho County bagged a silver medal in 10,000m at the Africa Junior Championships before winning 3000m gold at the Africa Youth in Mauritius.

In the women’ junior category, world youth 3000m bronze medallist Sheilah Chelangat blazes the trains from the South Rift region with her eyes fixed on making a cut to the team.

She won the junior race at the regional cross country. “I will run at the nationals and it is my prayer that I qualify for the world cross country. That is the target I have been training for this season,” She said.

She will battle Nairobi’s Celliphine Chepteek who won gold in Cali in 3000m.

Lilian Kasait the 2013 World Youth 3000m gold medallist in Ukraine has since graduated to senior ranks.

There are new entrants into the country’s athletic circles.Chebet Ng’etich and Ann Nyagothie from Central Rift region are the fresh blood in junior categories. They have been instrumental in some of the  AK cross country meetings and they are lauded to shine at the trials.

Korir said graduating from youth championships to junior cross country is the next step in athletics ladder encouraging athletes to follow the steps in order to stay relevant at the senior levels.

“There are those who have hurried their careers and destroyed them because they wanted to immediately compete in senior races just because they shone in youth categories. I like the smooth transition,”Korir said.